Curiosity Stream Is the Streaming Service for Science and Tech Lovers

Educate and entertain your household for a fraction of the cost of Netflix. 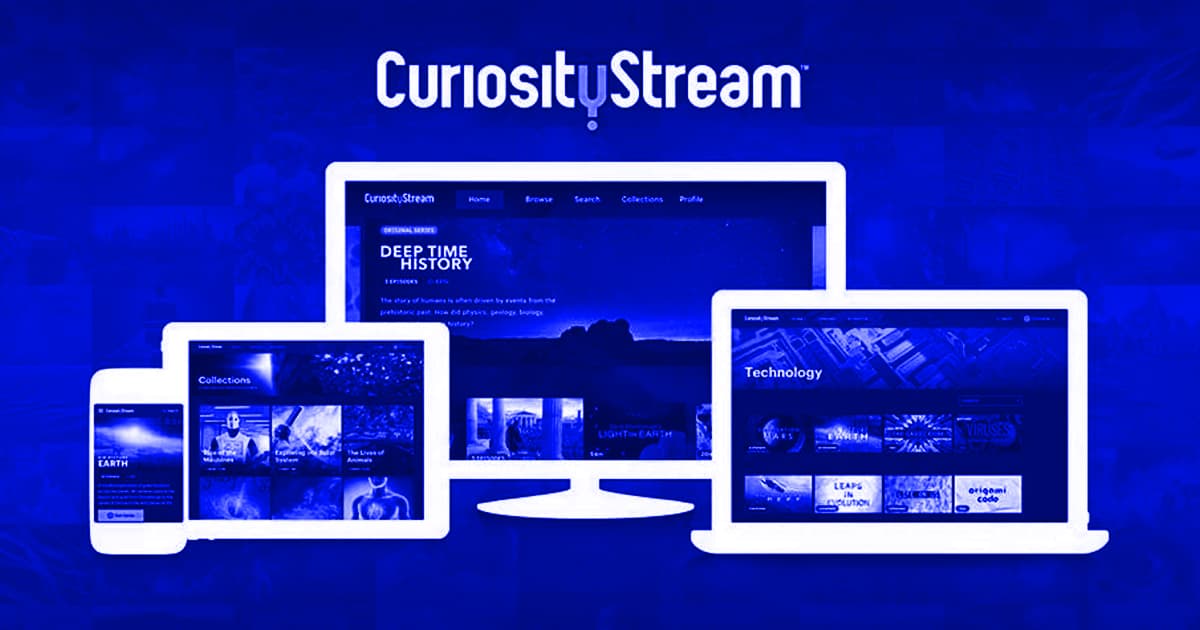 Watching hours upon hours of television is now more socially acceptable than ever before. But that doesn’t mean the shows you watch have to be brain-dead reality trash or lurid true crime horror. There’s a streaming service out there that’s specifically devoted to the best in educational programming, in the vein of classic Discovery Channel and TLC (before the dark times... before Honey Boo Boo). It’s called Curiosity Stream, and you can get a whole year of it for just $19.99.

The reason Curiosity Stream might remind you of old-school Discovery Channel is because it’s the product of John Hendricks, who was the founder and (until 2014) chairman of Discovery Communications. That's the parent company of Discovery Channel, The Learning Channel, Animal Planet, and more. And Curiosity Stream is a streaming service that operates along the same lines as those channels once did, with smart, entertaining, and educational programming like The Secrets of Quantum Physics, The Rise and Fall of T-Rex, Stephen Hawking’s Favorite Places, and many more.

How many more? Curiosity Stream boasts 2,400 programs and counting, with more being added all the time in a variety of subjects, including science, nature, history, technology, society, and myriad other educational topics.

All this programming costs as little as $19.99 a year or $2.99 a month, and it’s all available in crystal clear high definition. But if you’re a true videophile with a 4K setup, you can opt for the ultra-HD streaming plan, which itself costs $9.99 per month or $69.99 for a whole year -- still a bargain compared to most online streaming services. Another place where Curiosity Stream edges out the competition is in its complete lack of regional restrictions of any kind, so you can watch it wherever you are on Earth, and with offline viewing on phones and tablet devices, you can even access Curiosity Stream’s programming if you travel outside the boundaries of an Internet connection.

Curiosity Stream is also available on a wide range of devices, including Apple and Android tablets, LG, Sony, Vizio, and Samsung smart TVs, streaming devices like Apple TV, Roku TV, Amazon Fire TV, and Chromecast, and the Xbox One.

It turns out that there are a lot of people out there who are craving more educational and substantive entertainment. Earlier this year, Curiosity Stream passed the 13-million subscriber benchmark. So if you want a sporting chance of keeping up with your friends and coworkers in intellectual conversation, you better do yourself a favor and sign up now.

Head over to the official Curiosity Stream site here to get more information and sign up for an annual or monthly subscription. You can cancel at any time, but with more and more great educational documentary series and films being added on a regular basis, you probably won’t want to.

Read This Next
Brands We Love
Curiosity Stream Is a Streaming Service Tailor-Made for People Who Love to Learn
Brands We Love
If You Love To Learn, This Streaming Service Was Designed Just for You
Brands We Love
Watch Thousands of Thought-Provoking Shows and Documentaries on Curiosity Stream
Brands We Love
Lull Yourself To Sleep With A Two-Year Subscription To Restflix
Brands We Love
Curiosity Stream Is a Streaming Smörgåsbord of High-Quality Science-Focused Programs
More on Hard Science
Warped Tour
Feb 2 on futurism
Professor Believes Door to Warp Drive May Lie With Ethylene Glycol
Sky Bursts
Feb 2 on the byte
Astronomers Intrigued by 25 Mysterious Repeating Radio Signals From Deep Space
Tractor Beam
Jan 26 on the byte
Scientists Build Working Tractor Beam, Although It's Comically Tiny
READ MORE STORIES ABOUT / Hard Science
Keep up.
Subscribe to our daily newsletter to keep in touch with the subjects shaping our future.
+Social+Newsletter
TopicsAbout UsContact Us
Copyright ©, Camden Media Inc All Rights Reserved. See our User Agreement, Privacy Policy and Data Use Policy. The material on this site may not be reproduced, distributed, transmitted, cached or otherwise used, except with prior written permission of Futurism. Articles may contain affiliate links which enable us to share in the revenue of any purchases made.
Fonts by Typekit and Monotype.