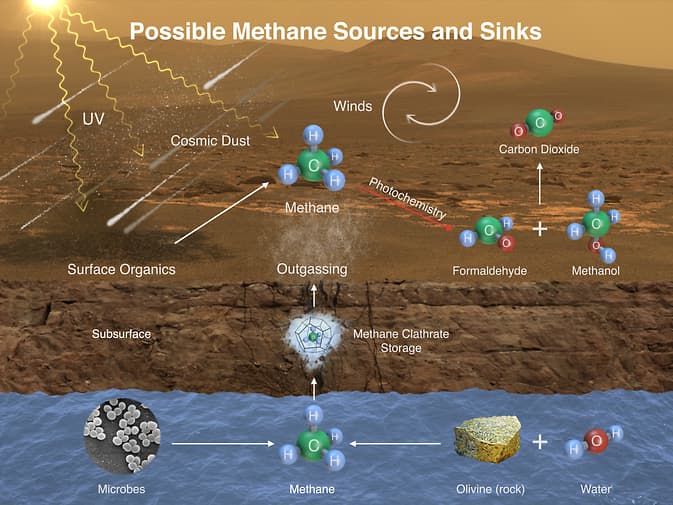 Yesterday, NASA announced that its Mars Science Laboratory, aka Curiosity rover, has recorded a huge spike in methane, an organic compound, in Mars' atmosphere, and in a powdered rock sample the rover drilled.

These findings were made with SAM, or the Sample Analysis at Mars (SAM). Over a 20-month period, Curiosity used SAM to "sniff" the Martian atmosphere in search of methane and other organic compounds. With the help of SAM's Tunable Laser Spectrometer (TLS), Curiosity was able to detect two significant spikes of methane, one in late 2013 and once in early 2014. During these periods, the level of methane spiked to seven parts per billion — that's ten times the "normal" background level.

First, Curiosity drilled a sample of mudstone, dubbed "Cumberland", and detected different organic chemicals in the powder. This was the first definitive proof of organics on the surface materials on Mars. What is unclear is the source of these organics.

Why Is This Important?

Well, organic molecules are molecules that contain hydrogen and carbon — the building blocks of life. It's important to note that these molecules are not necessarily indicative of life, past or present, as they can exist where life does not. They do, however, tell us that Mars is chemically active and had conditions more favorable for life sometime in the past.

"We will keep working on the puzzles these findings present," said John Grotzinger, another project scientist from Cal-tech. "Can we learn more about the active chemistry causing such fluctuations in the amount of methane in the atmosphere? Can we choose rock targets where identifiable organics have been preserved?"

After discovering such a large spike in methane, scientists here on Earth worked tirelessly, over many months, to ensure that the organic compounds detected were, in fact, Martian in origin, and were not carried to Mars from Earth by SAM.  After extensive testing, the analysis showed definitively that the compounds were indeed from Mars.

Naturally, Identifying organics on Mars is complicated. Martian rocks and soil samples often contain perchlorate, and when heated inside SAM, the perchlorate reacts with the organics, subsequently altering the structure of the compounds. This makes it near impossible to accurately determine which compound we have identified, and the distinction is key.

As Roger Summons, a team member from the Massachusetts Institute of Technology (MIT), notes: "Organics are important because they can tell us about the chemical pathways by which they were formed and preserved. In turn, this is informative about Earth-Mars differences and whether or not particular environments represented by Gale Crater sedimentary rocks were more or less favorable for accumulation of organic materials. The challenge now is to find other rocks on Mount Sharp that might have different and more extensive inventories of organic compounds."

Where Water Comes In:

There is water on Mars, but in the sense we find here on Earth. On Mars, the water, which seemingly formed about 3 billion years ago in Gale Crater, is bound into lakebed minerals, and after Curiosity drilled a sample of the Cumberland rock, it was able to "taste" the Martian water.

SAM was able to extract and analyze hydrogen isotopes from water molecules trapped inside rock samples. It then discovered that the ratio of a heavier hydrogen isotope (deuterium) to the most common isotope "gives us a signature for comparison across varying stages in a planet's development."

You might recognize the deuterium for its involvement in the Rosetta mission and comet 67P's water. Deuterium to hydrogen ratios can tell us a lot about a body's water, potentially even where it came from. The ratio of deuterium and hydrogen is known to change because the lighter (traditional) hydrogen molecules escape to the upper atmosphere more easily than their heavier deuterium counterpart. In order for scientists to see how the ratio in Mars' water changes over time, they need to look at the ratio of isotopes in water molecules currently, and compare it to the ratios found in rocks representing different periods in the planet's history.

"It's really interesting that our measurements from Curiosity of gases extracted from ancient rocks can tell us about loss of water from Mars," remarked Paul Mahaffy, SAM's principal investigator from NASA’s Goddard Space Flight Center.

Even the Martian meteorites we have found here on Earth can help, but there are gaps in the history, as no known Martian meteorites are even remotely close in age to the rocks Curiosity has access to (our calculations suggest they formed about 3.9 billion to 4.6 billion years ago).

The deuterium to hydrogen ratio in the Cumberland sample is one-half the ratio in water vapor detected in the current atmosphere of Mars, meaning that Mars has lost a significant amount of water well before the Cumberland rock formed. However, the Cumberland ratio is three times higher than the ratio in Mars' original water supply. (This is based on the assumption that that supply contained a ratio similar to that in the oceans here on Earth.)

While there is still no definitive proof that Mars once harbored life, we do know that the evidence is there (at least for microbes). Further analysis is needed. Scientists are hoping to see another methane spike in the coming months, which might lead us to the source of the spikes. Presently, they believe the source is in the vicinity of Gale Crater.

Regardless, "This temporary increase in methane — sharply up and then back down — tells us there must be some relatively localized source," said Sushil Atreya, a member of Curiosity's science team. "There are many possible sources, biological or non-biological, such as interaction of water and rock."

[su_divider text="Go back to top" style="double" size="6"] Curiosity's methane results are described in a paper published online this week in the journal 'Science.' A report on organics detection in the Cumberland rock is pending publication.