Crows Could be the Key to Helping Humanity Understand Alien Intelligence 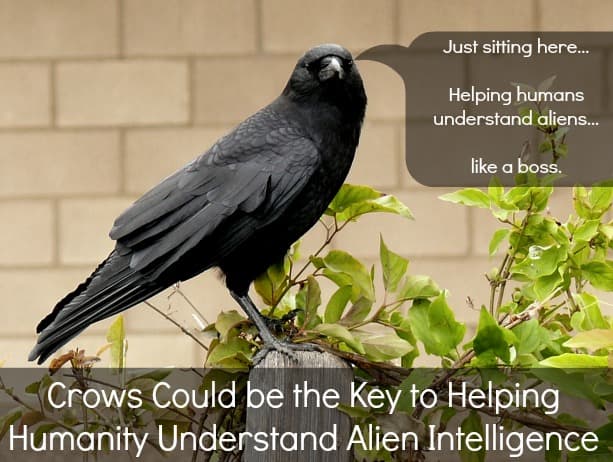 Yes, you read that right, understanding how a crow's brain works could lay the foundation to helping us understand how an alien mind might work. In case you don't know, crows are some of the most intelligent animals on Earth. They use tools and pass this knowledge onto their children, they will unite to fight a common enemy or intruder, and their ability to remember is almost unmatched. Recently, a study was conducted to see just how reasoning inside the bird's brain works, because a avialan brain is very different from a mammalian brain. Here, the rabbit hole goes deeper than we could have possibly imagined.

The Last Common Ancestor and the Evolution of Intelligence

Mammals and avialae shared a common ancestor about 300-million years ago during the Permian period, an era that predates the time of dinosaurs. This ancestor was probably about the size of a raccoon, looked like an unholy marriage of a rodent and a reptile, and was probably governed by instinct instead of "higher" brain functions that we normally associate with cognition.

This great-great-great-..........-great grandparent of ours had a region of the brain called the pallium. The pallium is the bit of the brain that eventually evolved to control the "sentience" (for lack of better words) of animals. For mammals, the pallium evolved into the prefrontal cortex (PFC) and is cram packed full of nerves that allow us the luxury of abstract reasoning. In birds, the PFC doesn't exist. Instead, the pallium moved up and became the nidopallium caudolaterale (NCL).

In both brains, the PFC and the NCL are responsible for "working memory, reversal learning, and reward prediction" and also "shares important properties such as dense innervation by dopaminergic fibres and connectivity patterns with multiple sensory input, limbic and motor output regions" according to the paper published by Lena Veit and Andreas Nieder, who have taken the study of the avialan brain to heart. In other words, the PFC and NCL are receptive to neurotransmitter stimuli, govern emotion, memory, and movement, deals with abstract reasoning, and is generally the command center of the brain.

The Reasoning of Crows

We know that the NCL is equivilant to the PFC, so now scientists want to watch a crow reason and solve a puzzle in real time to see what the brain does. You know the "one of these things isn't like the other" style puzzle? Veit and Nieder trained some crows to solve this type of puzzle and either identify two pictures as a match or as a mismatch.

Basically, the crows would be shown a single picture. They would be given a visual or auditory stimulus that told the crow to select a matching or a not matching picture. Then, the crow was presented with two pictures at the same time (one picture is the same as the one before, the other is different). The crow was then suppose to select either the picture that matched or the picture that did not match the one they were shown at the beginning of the test.

The results were nothing short of remarkable. While working the puzzle, the crow's brains would behave exactly the same way as the mammalian brain on the neuron level. Even though mammals and birds have "intelligence" in very different portions of the brain, it behaves in a remarkably similar way.

This display of intelligence is a perfect example of a phenomena called "parallel evolution" where two different species evolve to posses the same trait(s) completely independent of one another. As a matter of fact, the brain-to-body size ratio for birds and primates is pretty much the same. It is unsurprising that we might find mammalian type intelligence in these animals because they have all of the same equipment as we do, it's just wired a little differently. You could almost consider crows, and birds in general, as a type of "feathered ape" from a cognitive perspective.

OK, What about the Aliens?

In the end, crows give us an awesome opportunity. Here, we have two very different brains that are able to reason in similar ways. The crow's brain is the first "alien" brain, as compared to mammals, that humans have been able to study. This can serve as a beacon of hope for us since it teaches us that intelligence isn't just found in one type of brain - it's not just an evolutionary fluke that affected mammals. There are other types of brains that can house intelligence. In other words, we are not alone.

Side note: In this particular study, "intelligence" is being defined as the ability to reason abstractly. Intelligence can be defined in different ways by different people and different fields of science, but this is the way the term was defined for these tests.

You can see an awesome video of a crow solving a multiple step problem here: