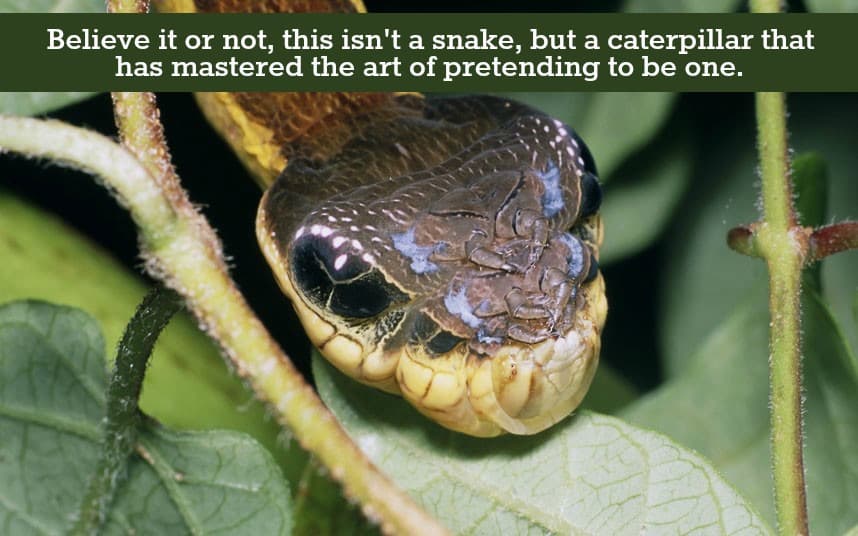 Since life first sparked up, creatures all across the animal kingdom have grown to have many different evolutionary advantages. It all generally boils down to survival. Out there in wild, predators loom around every corner. Without the ability to hide within plain sight, or to ward off predators, extinction is all but guaranteed.

As such, various creatures have keen camouflage skills. We’ve seen shape-shifting octopi; insects that look more plant than animal; owls that perfectly blend in with trees; along with highly-poisonous fish that look indistinguishable from their surroundings. Of all of them, perhaps the most intimidating-looking is this caterpillar. Instead of mimicking innocuous things like tree branches, seaweed or moss; it masquerades as one of nature’s most feared predators; the snake.

The caterpillar itself, which eventually morphs into the Hemeroplanes triptolemus moth once it reaches adulthood, can be found living in or near Costa Rica, Belize, Mexico and Guatemala. They also happen to be quite large (at least for caterpillars), which gives further credence to their disguise.

However, two other characteristics really sell the look; the realistic scales that cover them from head, wing to tail and the wickedly large “eyes” situated at the end of their body (though the way their bodies are structured, the eyes, which aren't eyes at all, but eye-shaped scales, appear in the same position snake’s eyes are found in). They even ‘slither’ around  by retracting both legs and expanding and contracting their bodies.

Moreover, these vividly green mock snake caterpillars have perfected the art of ACTING like a snake, particularly when they remain in larval form. If confronted by a perceived threat, they can even “strike” at the predator, only they can’t actually attack or administer any kind of poison.

Sadly, they only survive between 10 and 30 days. And instead of feeding on rodents and other smaller creatures, they feed on nectar. Still, it seems that this might very well be one of the most intimidating-looking, harmless creatures on the planet.

See it in Action: