Could we Prevent an Asteroid Collision? 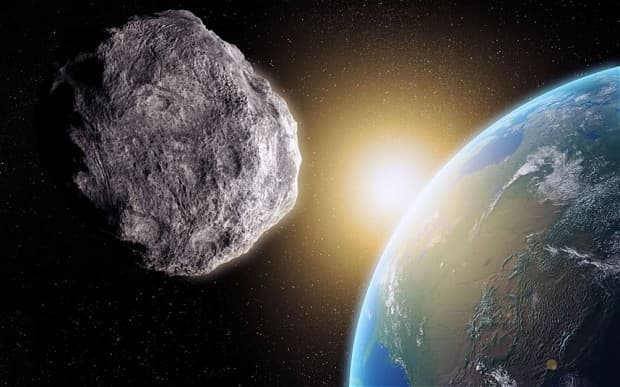 In its early life, the Earth would have been peppered nearly continuously with asteroids and debris. Today, the Earth still receives thousands of tons of matter from space, but this is in the form of microscopic dust particles. Fortunately, a large asteroid colliding with the surface of the Earth is very rare.  Nevertheless, it does happen from time to time. You probably heard about the Russian Chelyabinsk meteor which hit in February of this year. It entered at a shallow angle at 60 times the speed of sound, and it exploded in an air burst. The size of this body of rock (before it burnt up and shattered) was estimated to be around 20 m across and weigh 13,000 metric tons. This isn't large by any means, but it was enough to injure over a thousand people and damage nearly 20,000 buildings.

Lucky for us, larger impacts are very rare. Most notable of all these larger impacts is the 10 km sized object that is widely believed to have initiated the dinosaurs'extinction some 65 million years ago.  But what would happen if we were faced with such a threat today?

Currently, NASA is working to detect NEOs (Near Earth Objects) that may come into the inner solar system (NASA is currently focusing on identifying all objects that are over 1 km across, which could pose a threat to Earth). In July of 1999, an asteroid named ‘1999 NC43’ was spotted that had a diameter of 2.2 km. This object is suspected to be the origin of the Chelyabinsk meteor. It won’t make a close approach to Earth for over 150 years, and it does not seem to pose any threat. But  what if we discovered that one of these was on a definite collision course with us, are we adequately equipped to prevent a catastrophic event such as this?

This may upset the sci-fi fans, but unless an asteroid was very small, we won’t be able to destroy it or vaporize it - this is simply beyond our capability (at the moment). The easier approach to tackling a meteor is to provide a sufficient blast or ‘kick’ to knock it so that it will miss Earth. It sounds obvious and not too costly or time consuming however, the flaw with this method is that the object is still there in space, and this means that it will come back round again. As such, it is possible that it will eventually be back on a collision course with the Earth (though this may take quite a bit of time).

So, what other options are available to us? First, we have options that involve direct contact with the object, such as nuclear blasts, controlled collisions, attached rockets, and mass drivers. Then there are those that don’t require contact, including ion beams, solar energy, and gravitational power. These are all relatively undeveloped ideas, but I will talk about each one briefly.

Nuclear blasts: A nuclear explosion could be used in a variety of ways. First, it could be used to blast off enough material with enough power to change an objects angular momentum slightly. The bombs could also be positioned near the object, but not close enough to damage it, and these lines of explosions would probably be enough to alter its path.

Controlled collisions: When an asteroid nears the Earth, it is possible that we could use a current satellite, spacecraft, or specifically designed piece of kit to collide with the incoming body of rock. This is one of the most favored options when it comes to tackling an asteroid, and the ESA already has a mission in motion.

Attached rockets: Probably the least effective proposal of all is to try and attach some sort of propulsion device to drive the speeding object out the way of Earth. The asteroid will be travelling at a very high velocity, so matching such a speed and then landing on it would require precision timing and very precise calculations. Second, asteroids spin just like planets and stars, so it will be incredibly difficult to direct a force in any one direction.

Mass drivers: A mass driver is a machine that would work on the asteroid to slowly remove material and eject it into space. This would hopefully work to very slowly, and provide enough force to change its course. However, some have said that this idea might be more effective if used on the Moon. Here ,a mass driver could use the ‘unlimited’ supply of material as ‘rock bullets’ to redirect an asteroid.

Ion beams: A small spacecraft could work nearby the asteroid, firing a continuous beam of ions at the asteroid. The effect would be very small, and so would need a long time in advance to work. The advantage of this is that spacecraft need not be large and heavy.

Solar energy: This would work in a very similar way to the ion beam, a station of mirrors and lenses would be placed closer to the Sun. These would be able to focus the light onto the asteroid in an attempt to create a large enough force to move the object due to vaporization.

Gravitational power: The method I find most intriguing for deflecting an asteroid is the use of a gravity agent. A very large, heavy, and dense craft could be put into a close proximity to the asteroid. Then the very small pull between the bodies would (hopefully) slowly move the asteroid off course, and into a safer zone. This would literally take years to work, and the construction of such a device would also take some time.

I’m sure that, as we develop our technology, more options will come about for us, and we will develop more advanced ways to intercept these deadly cosmic balls of rock. Assuming that the human race can live on Earth sustainability, it is almost inevitable that we will have to face a large asteroid. When the time comes, it will be a test for Earth. Do you think we will be able to settle our differences under a common cause to protect ourselves from extinction? Or perish as a result of our own ignorance?