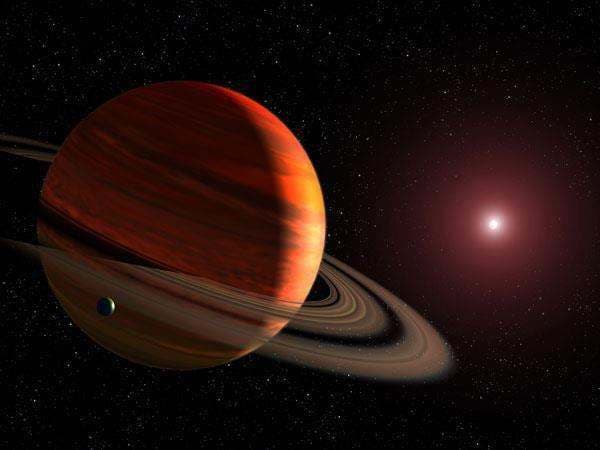 Most people assume that habitable planets will not be found in orbit around red dwarf stars. They believe that the conditions in this section of the universe are not conducive to life as we know it. Such beliefs are understandable. First of all, as far as stars go, red dwarfs are relatively small (usually with only half the mass of our sun). They are also rather dim (they emit less than 5% of the light that our own star gives off). Consequently, when comparing red dwarfs to average size suns, any habitable exoplanet orbiting a red dwarf would have to be orbiting very close to its parent star in order for liquid water to exist on the surface (something that is necessary for life as we know it).

Because of the close proximity, the exoplanet would experience an extreme amount of tidal forces caused by the gravitational interactions between the planet and the star. Eventually, these perturbations would cause the planet to become tidally locked to the star, with one side in infinite daytime and the other side basked in eternal darkness. The prospect of life arising and evolving on a planet that's partly scorching, while the other side is frozen in an endless winter, seems rather slim. However, there is one factor that must be taken into consideration before we draw our final conclusions: The Greenhouse Effect.

Let's say that an exoplanet that's orbiting a red dwarf has a significant atmosphere (one which, miraculously, hasn't been blown away by solar wind, despite how close the planet is to the star). Any such atmosphere, like one consisting of copious amounts of carbon dioxide, could produce a greenhouse effect that could hold in and redistribute the heat generated from the exoplanet's parent star. This would move some of the warmth around the planet, potentially heating the dark side of the world and (possibly) allowing liquid water to exist. So perhaps, in the right circumstances, a tidally locked planet that is orbiting a red dwarf could still be habitable, despite the unlikely odds.

Of course, living on such a planet would be bizarre to say the least. Weather patterns on Earth emanate from the sun. Since the Earth rotates around the Sun, and all portions of the planet experience both day and night, we have a hula-hoop formation for our weather patterns. On a tidally locked red dwarf exoplanet, weather patterns would propagate downwards in a spiral pattern like a ribbon wrapped around an orange from the top to the bottom.

But if we're learning one thing about exoplanets, it's that they have the strange ability to challenge everything we *think* we know about them.