Cosmic Cannibalism: The Surprising Eating Habits of the Umbrella Galaxy 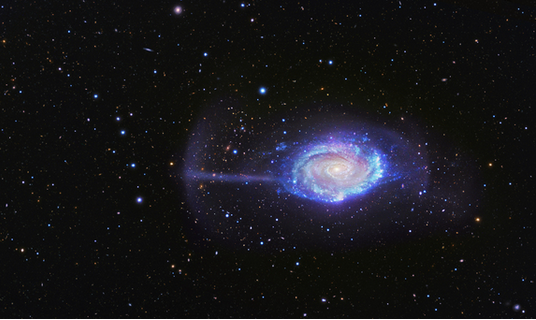 The Umbrella Galaxy (formally called NGC 4651) is, in many ways, the Milky Way’s twin. It is a spiral galaxy, like our own, only it drifts through the cosmos some 62 million light-years from our own Sun. The Umbrella galaxy gets its name from the parasol-like structure that extends from its side, which kind of makes the galaxy look a little bit like an umbrella of super- epic proportions (you can see the parasol structure to the left of the galaxy in this image).

Recently, astronomers have been studying this galaxy in an attempt to learn how galaxies grow. In order to get a better grasp of this process, they are looking at the way that the Umbrella cannibalizes other galaxies, and new research suggests that the whimsical parasol like structure that gives the Umbrella galaxy its unique shape is not what it seems.

Researchers, led by Caroline Foster of the Australian Astronomical Observatory (AAO), used observations obtained from the Subaru and Keck telescopes in Hawaii in order to track the movement of the stars in the stream and make this determination. The movements of the stars were tracked using globular clusters, planetary nebulae, and patches of hydrogen gas in the galaxy. When scientists discovered the Umbrella galaxy in the 1950s, they initially thought that the parasol structure was a companion dwarf galaxy. But Foster’s research indicates that what we though was a dwarf galaxy is actually the remains leftover from a previous meal.

"Through new techniques we have been able to measure the movements of the stars in the very distant, very faint, stellar stream in the Umbrella," Foster explained in a statement from the AAO. "This allows us to reconstruct the history of the system, which we couldn't before."

But before you start thinking that the Umbrella galaxy is the Milky Way’s evil twin, keep in mind that our own galaxy was formed in a similar manner: by cannibalizing several smaller galaxies. There are star crumbs (like bread crumbs, but way cooler) leading to a nearby galaxy (the Sagittarius dwarf galaxy). Ultimately, these star trails act just like the trail of bread crumbs that Hansel and Gretel used to find their way back from the Gingerbread house in the forest. The cosmic equivalent helps us trace the source of the cosmic creation responsible for warping the Umbrella Galaxy's shape, and similarly, it reveals that the Milky Way is consuming stars from Sagittarius.

And it seems that the eating habits of the Milky Way and Umbrella are not unique. A 2010 study that examined 8 spiral galaxies revealed that 6 of them had signs of similar mergers.

The study has been accepted for publication in the Monthly Notices of the Royal Astronomical Society, and it can be read here.