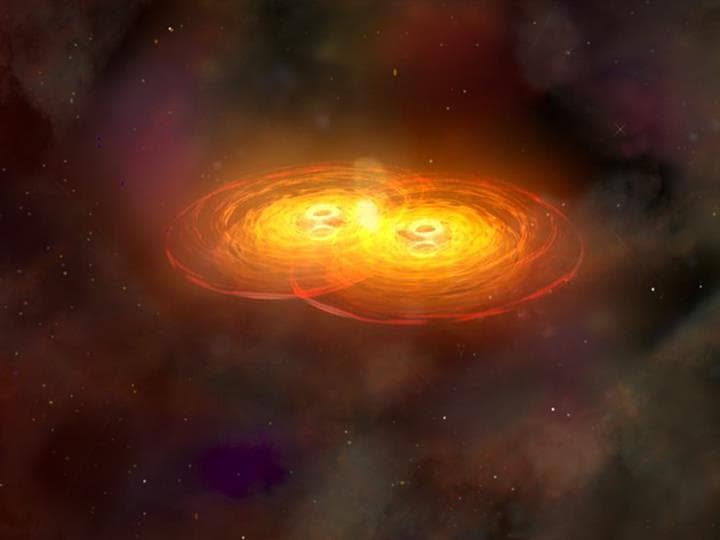 Black holes are some weird objects. Their hallmark is having a gravitational pull so strong that light can't even escape it. With a gravitational field that intense, it it possible for black holes to pull matter out of each other and return the once-consumed stuff back to "normal space?"?

The short answer is no.

A black hole (in the traditional sense) is defined as an object that has collapsed so that its radius is equal to, or less than, the Schwarzschild radius of the object.

What does this mean?

Every object has a Schwarzschild radius; this is the point at which an object's mass is so compressed that the gravitational influence overpowers the other forces of nature and it collapses to a singularity.

Of course, not every object is massive enough to collapse to its Schwarzschild radius. The Earth's Schwarzschild radius, for example, is about the diameter of a small marble. If you were to apply enough energy to the Earth and compress its mass to that size, it would collapse to form a black hole. The same is true for humans, except I'd need to compress you to a point some 10-million times smaller than a marble in order to turn you into a black hole.

So, what is special about the Schwarzschild radius? This is the point at which the escape velocity for the object is equal to the speed of light. Obviously, since you can't travel at ,or faster than, the speed of light you can't get out of a black hole, even if another black hole is pulling on you.

It's important to realize that, outside of the Schwarzschild radius (also known as the event horizon), spacetime is normal. You can interact with a black hole in the same ways you interact with any other object of mass.

Finally, a few side notes.

According to relativity, non-Schwarzschild black holes can exist. These are called 'naked singularities.' It's basically a black hole that is 'naked' which allows you to see the singularity at the center. I, personally, can't imagine how such an object can exist, but relativity allows it to be. However, in logic's defense, we haven't discovered a naked singularity to date, so they might only represent a valid equation without existing in nature.

The issue of what happens to the information that falls into a black hole has been a problem for physicists for a very long time. Leonard Susskind went to 'war' with Stephen Hawking about it and posed an interesting solution. He postulates that you can use a tether to retrieve information from the other side of a black hole. If you take Earth as an example, our escape velocity is about 11 km/s. But, if I used some type of machine (like an elevator), attached one end to an orbiting spacecraft and some type of container on the other, I could essentially pull you at whatever speed I wanted. In the same way, it's theoretically possible you could tether somebody (or equipment) to a spacecraft in orbit around a black hole, lower past the event horizon, then pull them back out (you'd need some very strong equipment to pull this off though).

Finally, on detecting two orbiting black holes. There are really two different ways we can detect a black hole (to make it simple, let’s assume just one black hole). Gravitational lensing and its gravitational effects on surrounding objects.

For gravitational lensing, we are able to detect the presence of a black hole by watching how it distorts light emitted from objects behind it. For gravitational effects, we can see visible objects interacting with the black hole with their orbits and, in some cases, distortion on objects unlucky enough to be very close to the black hole (such as watching black holes siphon material off of stars).