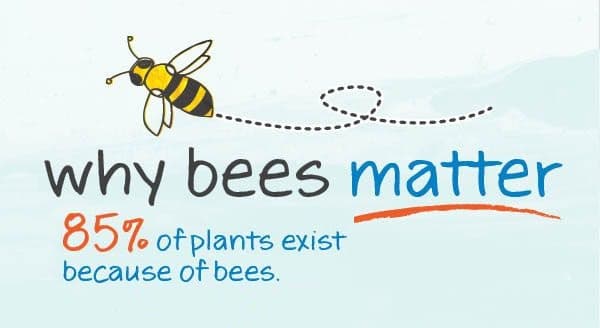 New evidence, which was brought to light through a new study conducted by biologist Jeremy Kerr, of the University of Ottawa, suggests that climate change is steadily shrinking the habitable range of wild bumblebees. After looking at data stretching all the way back to 1901, Kerr and his collaborators determined that bumblebees have been losing an average of 5.6 miles per year from the southern edges of their range since 1974. In addition, it appears that the bees in southern ranges have also sought higher, cooler conditions by moving upward in elevation an average of about 300 meters over the same span of time.

How do we know climate change is responsible? First, according to Kerr, the data, which is made up of approximately 423,000 observations of 67 bumblebee species in Europe and the United States, shows that things started to take a turn for the worst in 1974, the year when climate change is thought to have started accelerating. Second, Kerr and his team also looked at changes in the thermal ranges of the bees, and built statistical models to account for pesticide use and changes in useable habitat.  Alana Pindar, a coauthor on the study, points out that the bees were losing ground “even before the neonicotinoid pesticides came into play in the 1980's”.

Why is a warming planet having such an impact on bumblebees in particular? As big, fuzzy insects that tend to thrive in cooler climates, they simply don’t do well when it gets too warm. For example, the rusty patched bumblebee, one of about 250 species of bumblebee worldwide, has disappeared from the southeastern United States, most likely, because it just couldn’t take the heat.

Other kinds of insects, such as butterflies, have responded to changing temperatures and shrinking southern ranges by expanding their territories farther north. Could the bumblebees do the same?

It’s possible, but so far it doesn’t look like they have. There are many possible reasons why the bees haven’t struck out in search of new lands: the amount of daylight in latitudes farther north, the availability of accommodating habitat and plants, or simply the fact that bumblebee colonies tend to be small and therefore aren’t able to rapidly expand their territory in order to make up for lost ground.

For the past several years, the spotlight has been on Honeybees and their slowly disappearing numbers due to something called Colony Collapse Disorder. Although honeybees are undoubtedly important to the world’s ecosystem, bumblebees play a very significant role themselves. From spring through fall, bumblebees pollinate a wide variety of plants, including some (such as tomatoes), that are difficult for other kinds of bees to pollinate. Overall, the worldwide economic value of the work bumblebees do is about $3 billion.

Thankfully, not all bumblebees are having such a hard time; around 20-30% seem to be doing well; yet, research has shown that Colony Collapse Disorder is spreading to bumblebees. According to Kerr, studying these more resilient species, the ones that seem to thrive despite the changes, such as the European buff-tailed bumblebee, which seems to have adapted by successfully expanding their northern range, may help scientists figure out other ways to help more bees adapt to the changing climate.

WATCH: Why Bees are Disappearing