Cleaning the Cosmos with Space Harpoons 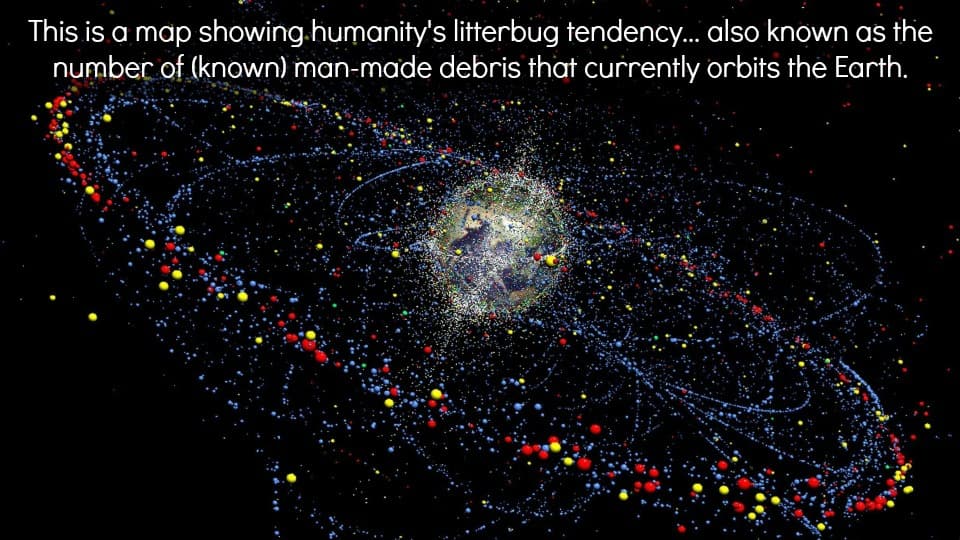 A computer simulation made by the Institute for Air and Spacesystems at the Technical University of Braunschweig, Germany, shows the distribution and movement of space debris at present and in future. (Image Credit: AP / TU Braunschweig)

There are over 17,000 individual pieces of human-made space debris, floating without regard, in Earth’s low orbit. These are the discarded remnants of nearly sixty years of space exploration. Space junk consists of anything from spent fuel cells to battery packs. The nearly twenty thousand pieces of trash left in space accounts for items that are large enough to be tracked and cataloged, objects roughly the size of a coffee cup. If scientists account for even smaller debris, bits and pieces 1 cm or larger: flecks of paint, nuts, bolts, screws, etcetera, and the number is expected to exceed 300,000 (NASA).

It’s becoming apparent that humans are no better at keeping debris out of space, than we are at keeping rubbish out of the oceans. The difference is trash in the oceans contributes to global pollution, disturbances in ecosystems, and the destruction of species unable to adapt our insatiable thirst for development and technology. The junk we have accumulated in space, on the other hand, has the potential to anchor us to this ever-polluted Earth indefinitely; creating an exponentially growing shield of debris that could make future space travel obsolete.

In addition to possibly halting our route to the universe, space garbage posses danger to any number of beneficial satellites that also inhabit low Earth orbit. Without such machines, much of the technologies we have grown accustom to today would cease to function. We use satellites for tracking weather and making predictions, navigation while driving, for communication, and scientific research. The potential for collisions between space debris and any one of these satellites is a viable concern.

This why the European Space Agency has announced they hope to start the cosmic clean up as soon as 2021. The e.DeOrbit mission is part of the ESA’s Clean Space Initiative; it’s main task: to hunt down renegade space debris in key orbiting regions and safely remove it. A variety of suggestions have been made for how to capture the wreckage. Nets and mechanical arms have been popular choices, and may very well aid in tidying up space; however, recent ESA research has shown promising results using harpoon technology.

Preliminary investigations, by Airbus Defense and Space, regarding harpoon technology and other waste removal concepts have already taken place. Paying homage to an ancient hunting technique, scientists hope to shoot out a harpoon attached to a tether, pierce the debris and reel it back in.

A prototype harpoon was projected into representative satellite material to assess its penetration, its strength as the target is pulled close and the generation of additional fragments that might threaten the e.DeOrbit satellite.

Scientists have already assessed a mock-up version of the technology. It was shot into demonstrative space junk to test how well it can puncture the material, whether it was powerful enough to reel it back in, and most importantly, that it doesn’t create more fragments in its wake.

“As a next step, ESA plans to build and test a prototype ‘breadboard’ version in the hope of adopting the harpoon and its ejection mechanism for the mission.The project will investigate all three stages of harpooning through computer models, analysis and experiments, leading to a full hardware demonstration.”

It is yet to be seen which means of trash removal will be the most beneficial. It may prove necessary for us to employ a variety of methods dependent on the size of the material in question (different strokes, if you will).