China Is Building a Supercomputer That Blows Away the Competition 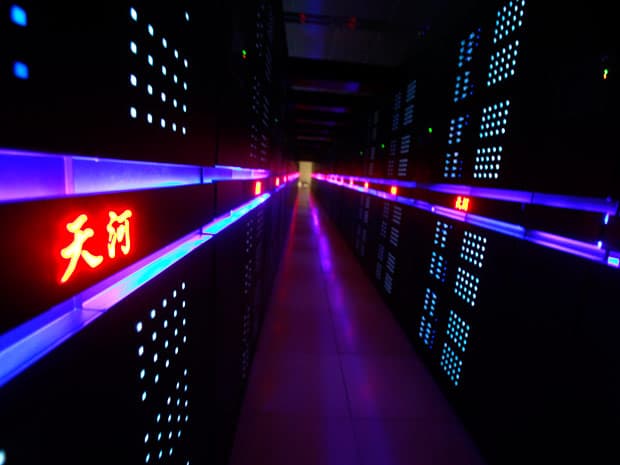 Last year, the U.S. stopped exporting its Intel chips to China for their key supercomputers, forcing them to think of alternatives in computing. But it seems that China has bounced back into the computer world, faster than before, and much sooner than anyone would have expected.

Designed by Dr. Yutong Lu, the system designer for multiple iterations of Tianhe supercomputers, the Tianhe-2A is an upgrade to the Tianhe 2, using novel architecture to work around the lack of Xeon Phi cores from trade restrictions. Using this technique, they have managed to create a design that gives the computer the extra 45 petaflops it needs to reign at the top of the computing world.

A petaflop represents the ability to do one quadrillion floating-point operations per second (FLOPS). The new Tianhe machine will be the most powerful machine in history, reaching up to a 100 petaflop peak.

Dr. Lu has had a highly successful history with her designs in the Tianhe line, beginning with the Tianhe-1A supercomputer in 2013 which dominated the Titan system. The machine continues to use Intel’s Xeon Haswell processors with a China Accelerator, but with the machine slated for release in 2016, it is likely that it will move off of its US dependency and use ShenWei or another Chinese chip design instead.

But what can this behemoth of a machine even be used for? Even the most adventurous of gamers and intense video editors use quad-core machines. Meanwhile, the Tianhe machine has 3,120,000 cores.

Lu says that the main application of the machine is for  computational fluid dynamics (CFD), tackling scramjet combustion and aircraft simulations for large passenger and cargo ships. Perhaps more interestingly, however, is its usage for genomics, particularly population genetics and biomedical applications.

The fact that the computer is hosted in a major defense research center (the National University of Defense Technology) and a design basis of digital signal processors (DSPs) makes it likely that it will also be used in a military or defense application in China. DSPs are often used in military applications such as remote sensing and radar.

Given China's occasional participation in questionably ethical research, we can only wait to see what they come up with using this machine.

Read This Next
Futurism
Forget High-Tech Watches; Future Spies May Carry Chemical Passwords On Napkins
Futurism
New Microchips Convert Data Stored as Light Waves into Sound Waves
Futurism
Are These Thin, Low-Power Semiconductors The Future of Computing?
Futurism
Graphene Computers Work 1000 Times Faster, Use Far Less Power
Futurism
Intel's New Processor is the First Consumer Chip to Offer a Teraflop of Power
More on Hard Science
Having a Blast
Jan 18 on the byte
New Study Shows Where You Should Hide to Survive a Nuclear Attack
Offworld Amino
Jan 15 on the byte
Scientists Find Building Blocks of Life in Meteor That Smashed Into Family's Driveway
Triple Threat
Jan 4 on the byte
Traveling Faster Than Light Would Mean Experiencing Multiple Timelines Simultaneously
READ MORE STORIES ABOUT / Hard Science
Keep up.
Subscribe to our daily newsletter to keep in touch with the subjects shaping our future.
+Social+Newsletter
TopicsAbout UsContact Us
Copyright ©, Camden Media Inc All Rights Reserved. See our User Agreement, Privacy Policy and Data Use Policy. The material on this site may not be reproduced, distributed, transmitted, cached or otherwise used, except with prior written permission of Futurism. Articles may contain affiliate links which enable us to share in the revenue of any purchases made.
Fonts by Typekit and Monotype.