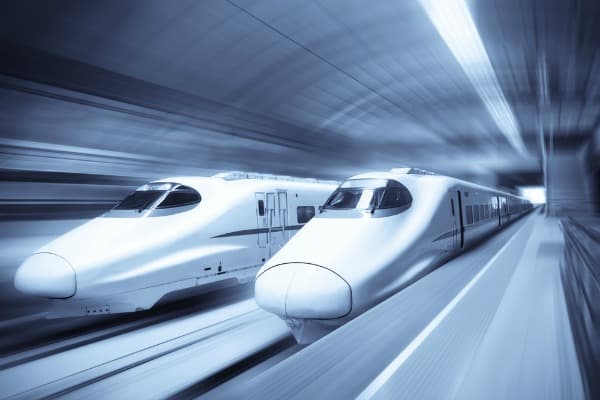 Many people are afraid of flying, which makes international travel a harrowing affair. But even those who are not scared of flight will likely love this proposal, as traveling across the ocean is often a wearisome and time consuming process—It seem that China is planning to build a high-speed railway beneath the Pacific Ocean, linking China with America. Reports assert that the new high-speed rail network may include a 13,000 km (8,077 mile) tunnel, part of which will run underwater to the United States. This is about 3,000km (1,864 miles) longer than the Tran-Siberian railway.

If successful, this astounding feat would make traveling across the world a bit easier. Currently,when flying to another nation, passengers have to disembark a number of times in order to catch connecting flights, often lugging a plethora of baggage (and sometimes children) from terminal to terminal. However, this rail would would do away with this lengthy, multi-stop process. But although this may end much of the hassle that is commonly associated with travel, the actual travel time would not decrease. Wang Meng-shu, from the Chinese Academy of Engineering, asserted that the train would travel at an estimated 350 km/h (220 mph), meaning that  the trip would take just about two days (current travelers from the US to China get to enjoy flights that take about 24 hours).

According to reports, the line would cross Siberia and the Bering Strait to Alaska (the narrowest point between Russia and the United States), and then travel across Canada into the lower United States. To cross the Bering Strait into Alaska, the rail would need a 201 km (125-mile) underwater tunnel. This portion of the tunnel would be around four times the length of the tunnel that crosses the English Channel and easily the longest undersea tunnel in the world (the current longest is the Paijanne Water Tunnel in Finland, which runs some 119km/ 74 miles).

Of course, the cost of such a project would be overwhelming,  Quartz estimates the cost of the America-China-Russia line to be around 200 billion US dollars, which is a little over half the amount of China's rail budget (it is estimated to be about 300 billion dollars).

This enterprise is just one of the projects that China is considering. The other projects include a Eurasian rail line, which would connect China to London, and a Pan-Asian rail line that would start in Kunming and connect Vietnam, Cambodia, Thailand, Malaysia, and Singapore: "The first is a line that would run from London via Paris, Berlin, Warsaw, Kiev and Moscow, where it would split into two routes, one of which would run to China through Kazakhstan and the other through eastern Siberia. The second line would begin in the far-western Chinese city of Urumqi and then run through Kazakhstan, Uzbekistan, Turkmenistan, Iran and Turkey to Germany. The third would begin in the south-western city of Kunming and end in Singapore."