What is the Scientific Method (an explanation using Cats): 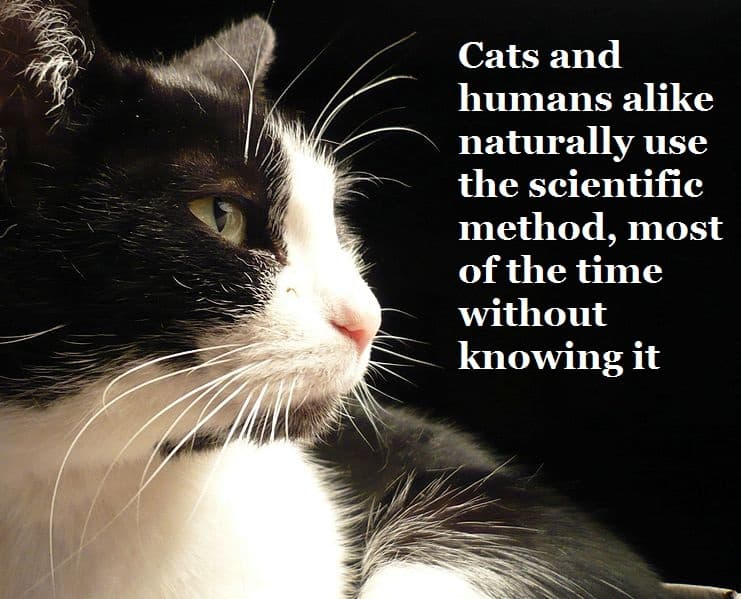 Scientific discoveries are often great, fantastical ideas that are quite hard to believe. This is rather ironic, as all throughout history mankind has wondered about their surroundings and yearned for a better understanding of the world around them. Humans poke, prod,and test the universe in an attempt to uncover its mysteries. Fortunately, scientists put a method to this madness to help us figure out what ideas should be believed and what should be left behind. This method is a powerful tool, The Scientific Method.

It is designed to function without bias, without conspiracy, and without the need to persuade others to believe the results. Scientific experiments and observations can and must be repeatable by anyone, letting scientists experience a conclusion for themselves (which is ultimately the beauty of the scientific method).

Francis Bacon was the first person to “formalize” the scientific method as we know it, though he did not do so alone. Nicolaus Copernicus and Galileo Galilei had tremendous influence on Bacon’s scientific method. Copernicus, with his heliocentric solar system, and Galileo’s study of motion using simple mathematical expressions led to the systematic approach to science. Next comes Newton. He is considered the first powerhouse of the scientific method. Through his work in mathematics, he created calculus; through his work in astronomy, he described gravitation; through optics, the first reflecting telescope. Newton did all of this using a similar type of the scientific method as we use today. It is not by chance that these great minds all approached the world of science in the same way. It’s pure logic, which Galileo, Copernicus, and Newton (among others) valued greatly.

Step one: Make an observation.

This is when some observation about the universe is made, which raises curiosity (or not). Making your observation is possibly the most simple but important part of the scientific method, for it gives you the “what?”  And the "what" will later lead you to ask “why?”.

"When making an observation, it is most helpful to get as close to the object as possible. This is clearly a cat".

When preforming science (in any capacity) there is a lot of information to dig out of every observation. In fact, there is so much information that one experiment can’t possibly cover everything – there are too many variables. This is why we narrow our search down and ask a specific question. This happens almost constantly with children, when they ask “why,” no matter how trivial, that “why” stems from an observation and starts them off on a journey of experimentation (whether the parent likes it or not).

"What if ancient Egyptians didn't actually worship cats? Instead, just had an early form of the internet. "

A hypothesis is literally just your best guess as to what will happen in your experiment (or observation). But a hypothesis makes much more than a guess. In general, we try to use (or acquire) all the well-known information we can about a topic. This way, in the next few steps, we get new and exciting information.

"If a cat is chasing a deer at 15 mph, and the deer is running at a speed of 10 mph, the cat should outrun the deer just in time to re-evaluate its choices."

This is often the most fun step, testing your hypothesis! This means, that you try to learn more about your hypothesis by “doing” science to it. This can mean further observation or maybe actually manipulating the experiment to get a new result.

"Just as I had expected. Claws + round thing = water!"

So, what happened with your experiment? What did you learn? First, we look at the experiment as a whole, and then we form a specific answer to our hypothesis based on the experiment.

"P value is greater than .05, and no journals will take my results... of course I'm depressed."

Step six: If the data you get from your experiment doesn’t support your hypothesis, start over!

The beauty of science is that failures are sometimes more helpful than successes. At the very least, you can say that “now you know,” Reform your hypothesis, take into account your previous experiment, and make a new, more educated guess. Repeat steps four and five!

The scientific method is one of the most important parts of scientific research, but it's not set in stone. Throughout history, and in the future, we will change and manipulate the scientific method to bring more clarity and precision to the world of science. Even in day to day life, we catch ourselves (and our cats) using this same process.