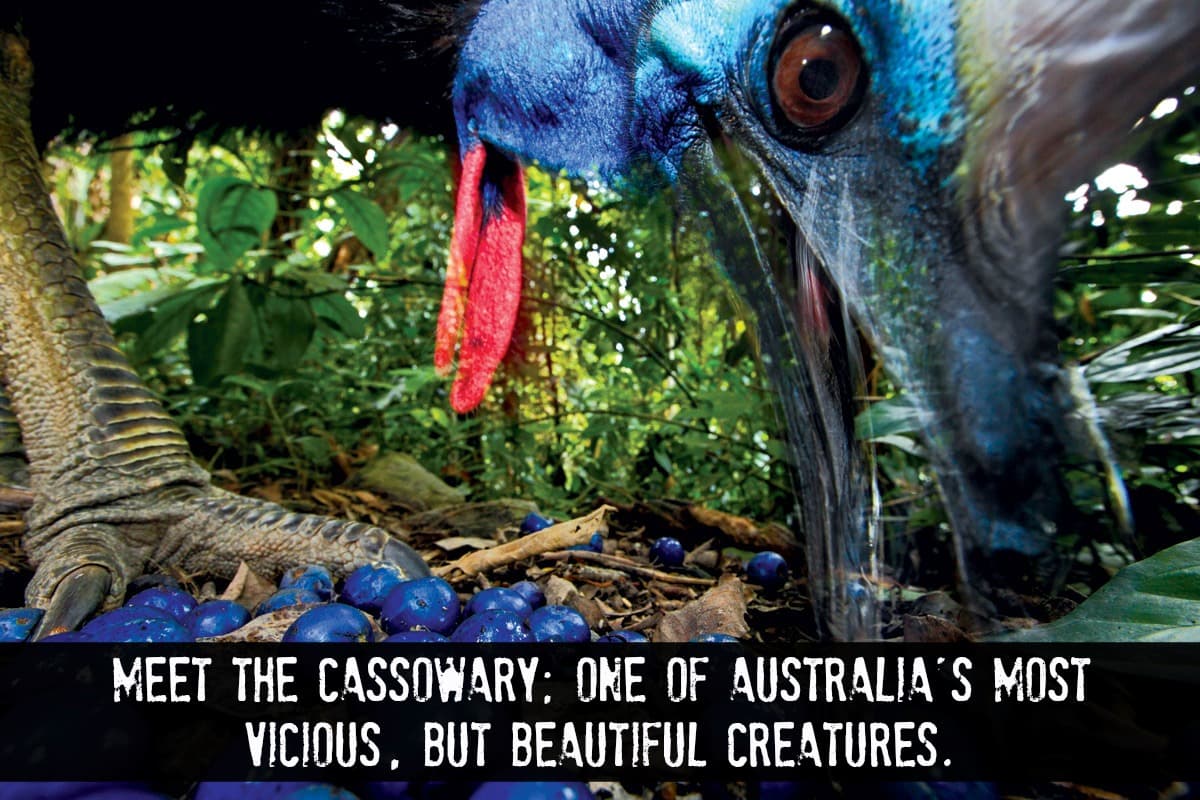 If Australia is known for one thing (other than their habit of referring to everyone as 'mate'), it's the plethora of colorful, deadly creatures indigenous to the country. There are so many of them, Australia sometimes appears to be some sort of an evolutionary death trap. Among said creatures; we come across one of the most fascinating -- meet the cassowary. This amazing, bright blue bird is perhaps one of the most dinosaur-esque creatures still roaming the Earth.

ALL ABOUT THE CASSOWARY:

Three separate species of cassowary have been recognized and documented. The size of each type depends on the location in which they are found. Yet once adult birds reach full maturity, they can measure in at approximately 6.5 feet (2 meters) in height, weighing approximately 130 pounds (58.5 kilograms). This would essentially make them some of the largest birds on the planet (the ostrich and emu are both exceptions), but an unfortunate side affect of their large stature is that, unlike conventional birds, they are unable to take flight.

As a rule of thumb, cassowary are typically shy, withdrawn creatures, but that is not always the case. Other times, they exhibit characteristics that are analogous to the velociraptor -- namely their long, sharp, three-pronged feet (particularly the middle toe, which can grow to be 6 inches [15 cm] long) On the subject of the dagger-like middle toe, ornithologist Thomas E. Gilliard notes that:

"The inner or second of the three toes is fitted with a long, straight, murderous nail which can sever an arm or eviscerate an abdomen with ease. There are many records of natives being killed by this bird."

Needless to say, the last thing you would want to pair with such a weapon is a temper, but that's exactly what you get with the creatures at certain times. They have quite the reputation concerning their notoriously short fuses. Furthermore, they are extremely territorial. They also have no qualms defending their territory, or fighting back when provoked.

These over-sized creatures generally prefer living out their days in the deep forest, but they can be often be found dwelling in northeastern Australia. They can also be found in the tropical forest of New Guinea and on neighboring islands. Furthermore, the largest of the bunch can be found there; the southern, northern and dwarf cassowaries. They are omnivorous (meaning they consume a nice mix of fruits, vegetables and meat), but they prefer fruit above all else.

As it turns out, it's really not that difficult to provoke birds. Sometimes, all it takes to ruffle their feathers is merely trespassing on what they perceive to be their turf.  You are in double trouble if they believe you pose a threat to their dinner or to their mate. Furthermore, a few cases have been reported of the birds attacking humans to steal THEIR food. So all in all, perhaps these fantastic creatures aren't too different from us after all. (On second thought, take a look at these legs):

As you can clearly see, these knife-like legs come straight from your nightmares. Yet, they have many more practical usages than merely slicing and dicing. The Cassowaries use them to help maneuver their way through thick brush at high speeds approaching 50 km/h (31 mph). Similarly, they use the extremely strong muscles in their legs to jump more than 1.5 meters (5 ft) in the air. Obviously, these things give them one heck of an advantage on the battlefield, as their legs are equipped with the necessary components to allow the creatures to launch themselves hard at their opponents, striking hard and fast. When they make contact, they use their momentum and full body weight to barrel down on the target, subsequently using their sharp toe claw to tear the creature in question a cornucopia of new orifices (and yes, it's probably just as unpleasant as it sounds). In fact, water isn't even a detriment to them. They are known to be extremely apt at swimming, even capable of swimming across the sea.

With all of this in mind, attacks on humans are exceedingly rare (they prefer dogs or similarly small creatures), but a few cases of Cassowary-on-human violence has been noted. Perhaps most famously is one such attack that took place in Queensland, Australia. In 1926, 16 year-old Philip Mclean, and his 13 year old brother were attacked by one pissed off Cassowary. The Mclean brothers, rather foolishly(thinking they had the numbers, ergo, the upper-hand), thought it was a good idea to bludgeon the creature to death with a homemade  club. The attack took a dangerous turn when the Cassowary fought back, kicking the younger boy down and knocking him back a few feet, before knocking the older boy down as well. The younger boy was able to escape, leaving relativity unscathed, but the older brother wasn't nearly as lucky. While on the ground, the Cassowary pummeled Philip in the neck with its deadly claw, nicking a major artery. He was able to flee, but not long after, he succumbed to the fatal wound and died.

Furthermore, another similar attack took place in 1990, though it was a little less gruesome. A different cassowary stalked and nearly killed a man under similar circumstances. After attacking the man and knocking him unconscious, the cassowary inserted its claw a few centimeters into the man's chest, but he survived.

To give you a better idea of how hostile they can be, it is said that during World War II, troops (yes, they were armed) stationed within the general vicinity of where they were known to dwell were cautioned to avoid them at all costs, as these amazing creatures have the brain power to strategically determine the best location to strike from. If they are unable to attack you from the front, whatever the reason may be, they will attempt to strike you from the side -- taking the term 'bird-brained' to a whole new, slightly hilarious, level.

Given everything we know about them, it would be easy to assume that they are less-than-stellar parents, but in reality, they are quite apt (particularly as far as the males are concerned). After the female Cassowary lays her eggs (generally laying between 3 and 8 at a time), the male mate spends the next 2 months incubating them until birth. He then watches over them for more than 9 months following their birth, making sure to shield them from predators until they are capable of fending for themselves in the wild.

Sadly, because of the continuous destruction of their natural habitat (the rainforest), the cassowary has been dubbed an endangered species. The extent of which remains unknown, but by some estimates, there are only 1,500 to 2,000 cassowaries still roaming the Earth. This is extremely shameful for a lot of reasons, especially when one recognizes the vital role they play in their own ecosystem. Their decline has also contributed to the decline of Ryparosa kurrangii, -- a special type of a tree that is indigenous (and exclusive) to a remote section of Australia’s Daintree Rainforest. Studies show that the trees are prone to self-destruction without the help of cassowaries. We aren't really sure what role they play in the budding of the seeds, but the numbers are telling all-the-same. Without the assistance of a wondering cassowary, only 4 percent of Ryparosa seeds grow. Whereas, with one passing by, 92 percent of the seeds do.

In conclusion, it's important to remember that the birds are not needlessly vicious creatures, who are bent on destruction. They, like humans, are biologically driven to protect themselves, their families, their territory and their livelihoods. It's usually we who are in their way.