Why Can't We Travel At The Speed of Light? 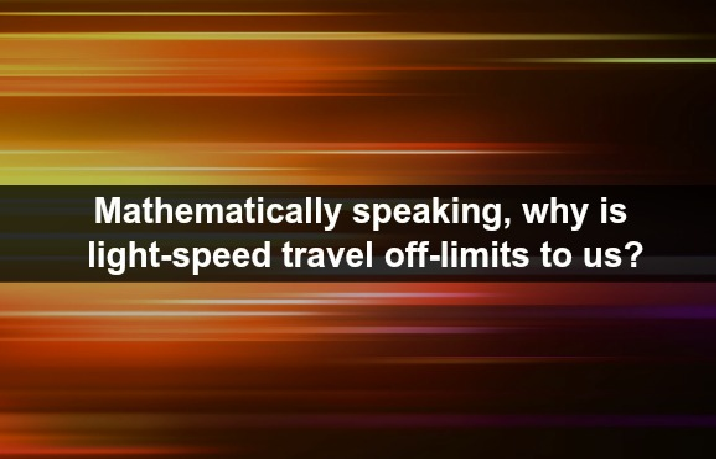 Simple, child-like curiosity taught us at a young age, that if we push an object, it will move. If we push harder, it will move faster and remain in motion longer. Clearly though, there are both physical and physics-induced limitations to this rule (though the latter didn't matter all that much back then. After all, how many among us thought we could defy gravity with a sheet or a cape?). With that said, could we ever push an object hard enough that it eventually moves at the speed of light? The answer to that question, according to Einstein's theory of special relativity, is a resounding no.

No matter how hard we push an object, it will never (ever) be able to match the speed at which light travels. For some perspective here, at the Large Hadron Collider (LHC), physicists are only able to accelerate electrons to 99.9999991% the speed of light. No, this has nothing to do with the LHC itself (it's certainly one of the most sophisticated machines ever built), but because this speed for any other particle beyond the photon, even in principle, is impossible to achieve with or without atom smashers like the LHC.

Moving forward; to change an object's velocity from 0 to some value, we must apply a force to it. This force will produce an acceleration, according to Newton's second law (F = ma). To understand why light-speed travel is impossible, we need to look at Newton's second law from another point of view; in terms of momentum. Momentum is the product of an object's mass and velocity. To change the velocity of an object, and hence its momentum, we need to apply a force for a specific amount of time. The product of this force and time is called impulse.

The faster the object moves, the larger the momentum, and also the larger the impulse required to speed it up. Newton's Second Law does not impose a speed limit for any object in the universe, as we can apply a finite impulse for any speed that we want. This law, however, was mathematically proven by Einstein to fail at relativistic speeds (speeds that are comparable to the speed of light).

In the mathematics of special relativity, one specific number is always used, and this is called the Lorentz Factor. It, in turn, is a function of an object's speed. In simple terms, its value depends on the object's speed. (Its mathematical formula is seen on the right)

Einstein said in his theory of special relativity that the correct formula for the momentum is mass times velocity times the Lorentz Factor. To understand how momentum works at relativistic speeds, we must first understand the characteristics of this so-called Lorentz Factor. Below is a table of its values at different velocities:

At non-relativistic speeds, the Lorentz Factor is equal to one, and since momentum in Special Relativity is equal to the Lorentz Factor times the mass times the velocity, it reduces back to Newton's formula for momentum, which is just mass times velocity. As we increase the speed to relativistic speeds, the momentum will increase even more. This means that we will need a much greater impulse to further increase the speed. Here we can finally see why nothing can travel at the exact speed of light but light itself. The momentum at the speed of light will have increased to infinity and will need an infinite amount of force (not to mention, energy) to get it there.

WATCH: "Can You Go the Speed of Light?"