We Can Now Target Diseases by Mimicking Blood Vessels

This could usher in a new age of patient-specific treatments.

Developments in nanotechnology in recent years have largely paved the way for how we treat human diseases. Minute devices only measuring a mere 1 to 100 micrometers in length have allowed us to view and target individual cells for treatment.

But even with the ability to directly deliver drugs to cells, we have not been able to observe cell to cell interactions in a micro-fluid environment. Being able to view a micro-fluid environment that mimics blood flow would help scientists to discover how cells react to disease conditions – as well as how they might react to specialized treatment.

Recently, a team of researchers from the University of Pennsylvania and LeHigh University discovered a technique to do just that. Their research is targeted towards blood vessel inflammation that leads to heart disease, causing more than 17.3 million deaths per year worldwide.

Their work is published in Biomicrofluidics.

This type of inflammation occurs from dysfunctional cells (specifically, endothelial cells) after they come into contact with a molecule known as the intercellular adhesion molecule-1 (ICAM-1). ICAM-1 clings to the surface of the cells, which is what leads to the inflammation. Being able to directly observe the damaged endothelial cells in this micro-fluid environment will allow researchers to develop treatment much more effectively. 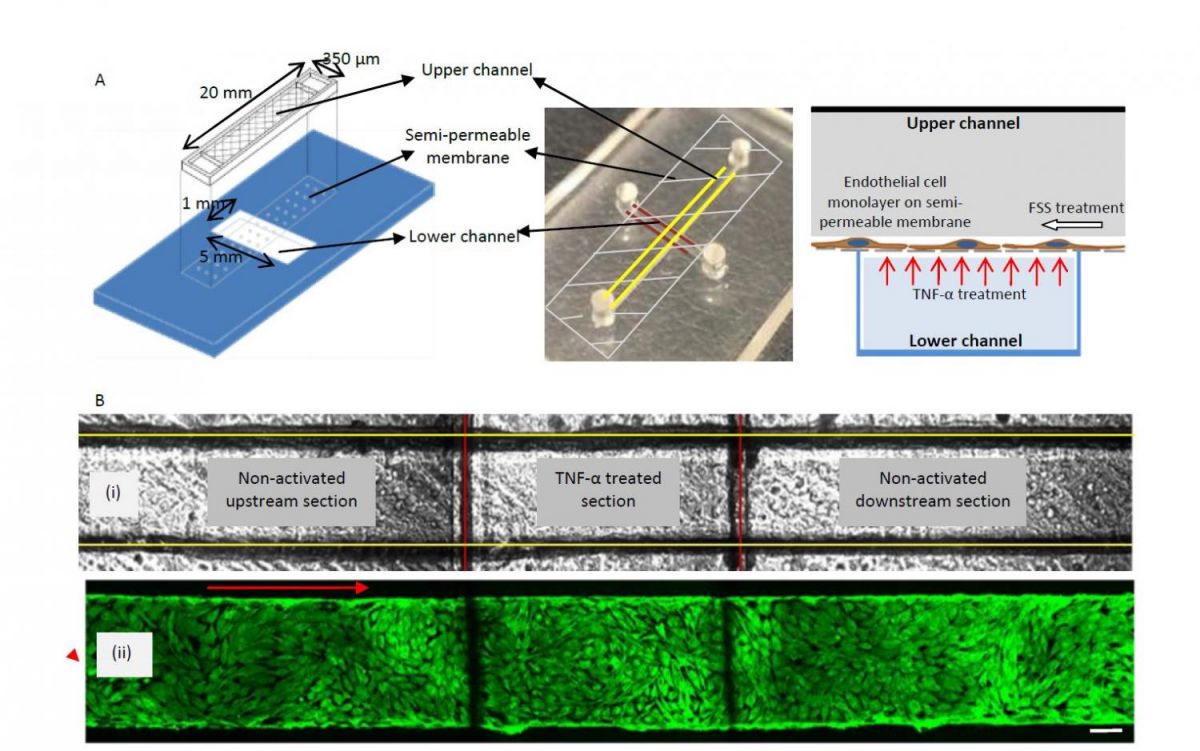 Observing these conditions from inside the human body is not possible, and using a static cell culture (such as a Petri dish) does not mimic this environment.

So the team turned to ICAM-1 antibody-coated nanoparticles as imaging probes in order to assess the cell’s condition. “We were able to mimic and observe the dynamic transfer process – that moment when [ICAM-1] antibody-coated nanoparticles binds to the cell, signaling inflammation upregulation by endothelial cells – on a chip,” explained Yaling Liu, Associate Professor of Mechanical Engineering and Mechanics, Bioengineering at Lehigh, and co-author on the study.

This method, he adds, costs less than other techniques, is generally safer, and stimulates similar conditions in the human body.

The benefits are numerous. The team’s ingenuity could pave the way towards a new strategy in determining drug safety and effectiveness. Because both healthy and diseased cells exist on the chip at the same time, the localized area can be used to test the effectiveness of drugs.

If successful, it would reduce the need for human clinical trials, which end up costing between $50 and $115 million per drug tested.

This number increases depending on the anatomical region associated. Pharmaceutical companies could get a glimpse into drug efficacy before opting for clinical trials. It would also allow for a greater release of FDA-approved drugs, as clinical trials slow this process. Culturing patient’s cells directly to the chip may also lead to patient-specific therapy.

As their research widens beyond blood vessel inflammation, Liu and his team hope to pioneer a new age of improved medicine.

Magnetically-Controlled Organic Microbots Could Change Medicine in the Next Decade

New Flexible, Lightweight Device Lets You Transform Anything Into a Speaker

Your Skin Heals Itself. Soon, Robots’ Skin Will, Too.