Can Moons Have Moons? 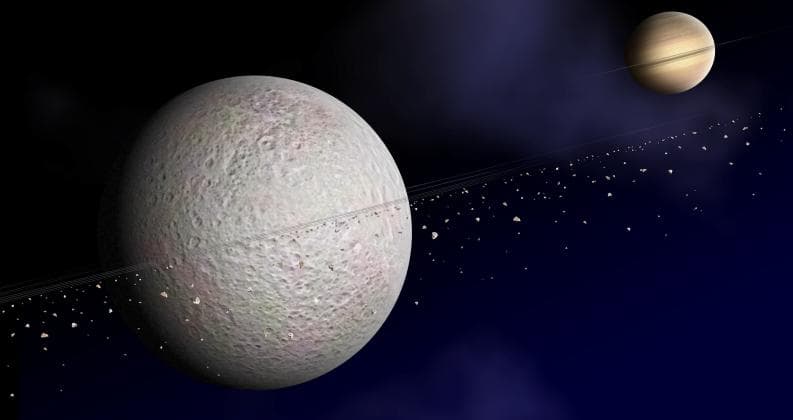 The answer to this question is not black and white.  To answer it more completely, let’s back up.  What is a moon?  The International Astronomical Union Assembly of 2006 yielded this definition for a planet:

“A ‘planet’ is defined as a celestial body that (a) is in orbit around the Sun, (b) has sufficient mass for its self-gravity to overcome rigid body forces so that it assumes a hydrostatic equilibrium (nearly round) shape, and (c) has cleared the neighbourhood around its orbit.”

Unfortunately there is no official definition of a moon.  Most astronomers just refer to them as natural satellites.  So throughout this article, when I refer to a moon I am speaking of a natural satellite of a planet as defined by the IAU.  So picture looking up on a clear night, and you see the moon, full and bright.  After watching it for some time, a second, smaller sphere begins to slowly peek its way around from the other side of the moon.  We’ll call this hypothetical object a sub-moon.

It would be quite a sight, and it seems plausible.  After all, the sun is a satellite of the galactic center, and the earth orbits the sun, the moon orbits the earth…couldn’t nature just go one step further?  The moon, like all other massive objects, produces it’s own gravity.  That’s what allowed us to land on the moon and put things into orbit around it.

So we can orbit the moon, doesn't that prove sub-moons are a possibility?  Again, not exactly.  As of right now there are 174 known moons in our solar system orbiting the eight major planets, and none of them have sub-moons of their own.  It was thought that Saturn's moon, Rhea, might have its own ring system, but such claims have been since dismissed.  If true this would have been the closest thing to a sub-moon within our solar system.

So it could be possible, but with so many moons why don’t we see it happening?  Believe it or not, the reason is likely because of the age of the solar system.  All objects within orbit have something called a Hill Sphere, which is an area around an object (say, the Earth) where it’s gravity is more powerful than the object it orbits around.  An object outside of the moon’s Hill Sphere would orbit (or fall to) the Earth.  Outside the Earth’s sphere you would orbit the sun.  The trouble is that the smaller the object, the smaller the sphere.

On top of this, the more levels of orbits you have, the more unstable the orbit is.  For example, it would take a lot to pull our sun out of orbit, but to pull the Earth out of orbit would only require another star to pass too close to our solar system.  On the level of a sub-moon, the orbit would be horribly unstable for a celestial object.  In the case of the Earth-moon system, their are tidal forces between the moon and the Earth, which cause the moon to be gravitationally locked with the Earth.  If you combine all of these factors, a possible sub-moon would fall out of orbit on a cosmologically short time scale.  A sub-moon could last long enough for us to enjoy it, perhaps thousand of years (its lifespan depends on lots of different factors), but most, if not all, moons probably formed in the early solar system.  So a sub-moon would most likely not last long enough for humans to see it 5 billion years down the line.  It’s not impossible, it just requires very special circumstances, ones we were not blessed with.

Cheer up, though!  Within the next several years, our dreams of a sub-moon may come true.  NASA plans to capture an asteroid and plant it into orbit around our lunar friend.  I should mention that the asteroid will only be seven or eight meters wide, so don't get your hopes up for a sub-moon to be seen in the sky any time soon.