What is a Type II Supernova? 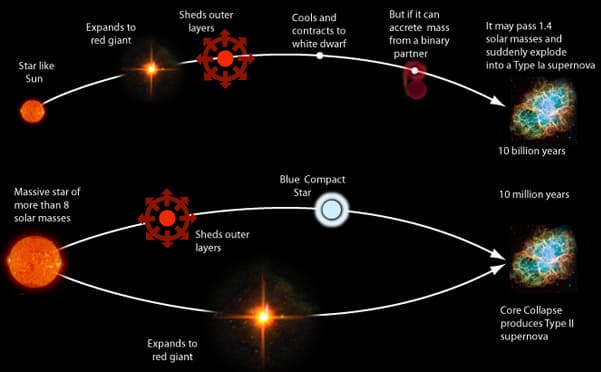 Supernova, something that we've all heard about at one time or another, are simply amazing celestial events. The type that we're going to be looking at is today is Type II supernova. These occur when a neutron star or a black hole is left behind after the death of the star ie., after the supernova occurs. For a bit of background information, I've created a chart that we can use as a rough guide so as to be able to work out what will be left behind during this final stage of a star’s life (scroll to the bottom to see the chart).

So let’s say we have a 15 solar mass star, based on the stellar evolution chart below, we can see that there will be a supernova and a neutron star leftover. However, even with all of our advanced supercomputers and everything that we currently know about physics and the universe, running a computer model of a supernova still proves to be a very difficult task. What we think happens during a supernova is that, when our 15 solar mass star runs out of fuel, the iron core will shrink from about the size of the Earth to the size of a town on the order of 150 milliseconds... That's unbelievably fast! The only force stopping it from getting any smaller is neutron degeneracy, meaning that the neutrons cannot be pushed any closer together.

As you can imagine, if the core of the star (which may already be as much as twice the mass of our sun) is compressed into a 10 km sphere, gravity is going to be quite intense. The moment that the iron core shrinks the rest of the star falls in towards the core as well, sometimes reaching speeds up to 25% of the speed of light! All of this material then hits the stellar core and bounces... and it bounces hard. Tremendous amounts of energy are released, about half of it goes into kinetic energy, blowing the star apart, and the other half is turned directly into heat.

However, current computer modeling suggests that a core bounce does not quite provide enough energy to power a supernova, there must be more to it. It is well known and documented that supernovae are basically just massive neutrino factories. A supernova is so bright that it will typically be brighter than an entire galaxy-- as you can imagine, this is very bright. The neutrino output, however, is about 100 times brighter still!

What some more recent computer models have shown is that, during the core collapse, not all of the neutrinos are able to escape. These very small and not overly energy particles don't much like interacting with normal matter. They do interact with normal matter, but quite infrequently. It is estimated that tens of thousands of these tiny particles pass through the human body every second of every day over the course of our entire lives. Most pass straight through the Earth as if it wasn't even there.

As a large star is undergoing a core collapse, it become very dense at the area just above the newly fledged neutron star, so dense that a higher concentration of the neutrinos actually interact with the in-falling gas and boil it. This is called “neutrino heating,” the neutrinos passing along their energy as well as the energy from the core bounce, that we have enough energy for a supernova.

When running computer models of supernova, they make far more sense when both core bounce and neutrinos are used in the simulation. As our understanding of what is actually going on in these weird and wonderful parts of the universe increases, and our processing power increases, we're getting closer to being able to successfully emulate what we're seeing out in the universe. We may not quite be there yet but we're working on it.

For more information on how nothing is sometimes leftover, read the following article:

Can a Star Explode without Leaving any Remnant? – The Explanation.