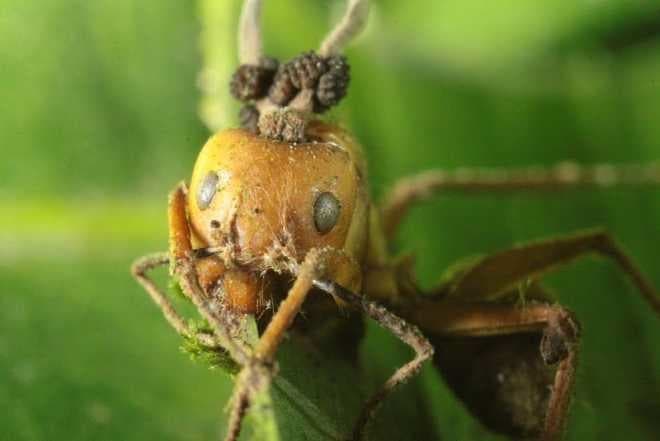 Humans love zombies. They are the source for a multitude of movies, books, television shows, and games—our society can't seem to get enough of them.  These fictional zombies are (almost) always twisted and mindlessly aggressive characters that are created from a normal host of some species. They consume others of their species and (sometimes) convert them into horrors like themselves (zombies sound like a lovely bunch, don't they?). Sometimes the zombies are animated corpses, sometimes they are alive but have been overtaken by some horror (a parasite or disease). The point is, these fictional creatures no longer have control of their own bodies.

The key word in the aforementioned description is "fictional."

However, as it turns out, this keyword is a bit misleading. Body invading parasites do exist, and they do turn other species into zombies; however, they don't really impact humans. Parasites exist for humans, of course, but they don't really take over our minds or control our bodies.

So, let's see how well fiction stacks up against reality and take a look at some of the zombie creatures (and the parasites that create them).

The first parasite is known as "Leucochloridium." This one does not kill the host directly. Instead, it alters the host's behavior to accomplish what it needs to do in order to survive (and what it needs is for the snail to be eaten).

The intermediate host of the this parasite is the snail, but it needs to get into an bird's stomach in order to keep its life-cycle going (a robin's stomach, to be precise). Snails generally spend their days eating bird droppings and tottering about on leaves. Leucochloridium uses the snail's food as its means of entry; it enters the snail when it consumes the feces of a robin that is carrying the parasite.

The below, right picture shows the result.

You may see the snail's brightly colored, new tentacles and think that it looks beautiful. But unfortunately for the snail, these beautiful colors don't just attract our attention.

After consuming microscopic eggs in the robin's droppings, the  parasite pumps embryo after embryo into fat, throbbing brood sacs builds up in the snail’s eyestalks. It engorges the tentacles, painting them with color, making them vibrant and easy to spot.

These biological beacons serve a macabre purpose: to attract a predatory robin.

The snail mindlessly treks to high ground. Driven by the parasite, it slithers its way up the stalks of the highest plants and puts its swollen tentacles out in the open and on display. The pulsations emulate a maggot (a larva of a fly) moving, which would make a scrumptious snack for a bird. The robin swoops down and takes the easy meal, happily eating the head of the snail.

And the parasite has now triumphed.

Inside the robin's stomach, the parasitic worm happily reproduces. The cycle is completes itself when the robin defecates with the microscopic eggs in the feces, and the parasite waits for the next unfortunate, hungry snail. See a horrifying video of how this parasite works here.

The second mind-controlling parasite is a parasitic fungus called "Ophiocordyceps." This fungus specifically targets certain kinds of ants. The fungus enters the ant through its body (usually canopy worker ants), and it soon begins its mind-controlling take over.

The infected ants suffer from convulsions, causing them to fall to the ground. Next, through mechanisms still unknown to scientists, it begins modifying the ant's behavior.

Here is where things get interesting: the zombie ant climbs up the stem of a plant and uses its mandibles to secure itself with a death grip to the underside of the main vein of a leaf, at precisely 25 cm off the ground, facing a specific direction and with a specific amount of humidity. Upon dissection, researchers discovered that, when the ant bites down on the leaf, its head is filled with fungal cells. These cells affect the motion of the jaw, making it impossible for the ant to open its mouth, keeping it trapped on the underside of the leaf. Then, through enormous amount of pressure, a  fungus stalk erupts from the head of the ant.

After 4- 10 days it releases its spores.

Under a single infected ant, 20-30 new targets (in a square meter) will now be converted into a zombie graveyard by coming into contact with the spores released from the head of the infected ant. Each one will go on a new, mindless excursion to climb plants and lock their mandibles into leaf stalks. Scientists are not clear how the fungus controls the ants it infects, but they know that the parasite releases alkaloid chemicals into the insect as it consumes it from the inside.

Ophiocordyceps has been observed decimating entire ant colonies (which can contain tens of thousands of ants). In response to this threat, ants have evolved the ability to detect when a member of the colony is infected. When ants detect that one of their kind has become infected, the healthy ants will whisk away the dying one, carrying it far away from the colony in order to avoid further fungal spore exposure. Fortunately, this fungus can’t alter human brains. And it doesn't seem like it will evolve and attack us anytime soon. Nonetheless, organisms like this one make the horrors of science-fiction seem disturbingly real. See a video of how the parasite operates here.

The next parasite is parasitoid wasp (that's right--a wasp that is a parasite) from the Apocrita suborder, more specifically, a Parasitica group of that order. Some of these parasites infect spiders (as you may remember, the tarantula hawk attacks spiders), but caterpillars are the preferred host targets for other species of wasp.

Adult female wasps infect caterpillars by ovipositing their eggs into their host's bodies or on them through a modified stinger. The females of some parasitoid wasp species also insert secretory products that protect the egg from the immune system of the host caterpillar.

Once parasitized, the caterpillar goes on a eating rampage. It eats for 2 weeks straight, becoming fairly obese. The wasp larvae then start to consume the blood of the caterpillar and grow, accounting for a third of the host's weight or more. They feast voraciously, but they are careful not to touch the vital organs, so they can keep the caterpillar alive. After 2 weeks of eating and developing, they literally bore their way out of the host's epidermis, slicing through the layers of skin to break free with their tiny saw-like teeth. While they do this, they release more chemicals to paralyze the caterpillar while they cut their way out of its body.

Once free, they enter a new phase of development. They spin silken cocoons to provide the last environment needed for their metamorphosis. The larvae themselves are at an incredible amount of risk from getting eaten by other insects or getting impregnated themselves by other parasitic wasps (an ironic and vicious cycle indeed).

Here is where things get crazy (as if they weren't crazy before). The wounded, parasitized caterpillar starts spinning ITS silk onto the larva's silken cocoons, rather than itself, giving the wasp larva a further layer of protection. And the wasp virus (called Polydnaviruses) takes this whole process one step further. It turns the caterpillar into the watchful guardian of the vulnerable larvae!! The zombie host aggressively PROTECTS the very larvae that was previously feeding off its insides. This angry sentinel fights off all enemy insects unceasingly until it literally starves to death. Absolutely amazing. See a video of this process here.

In general, host defenses also evolve to counter the attacks by parasites. Alas, parasites ultimately have an advantage in this evolutionary arms race because their generation time is vastly shorter. Hosts reproduce less quickly than parasites, and therefore have fewer chances to  adapt than the parasites do over any given span of time. Further complicating the issue, multiple parasites fight over the same hosts. This competition further spurs the parasite's evolution as the strongest are generally the ones that win this competition. But there are species called "hyperparasites" that actually use parasitoids are the target hosts, which provides a bit of a balance. Evolution can be a scary chess match, where the loser dies a horrible death, but fortunately nature provides checks and balances wherever it can.