Blue Stragglers: The Blood Suckers of the Universe 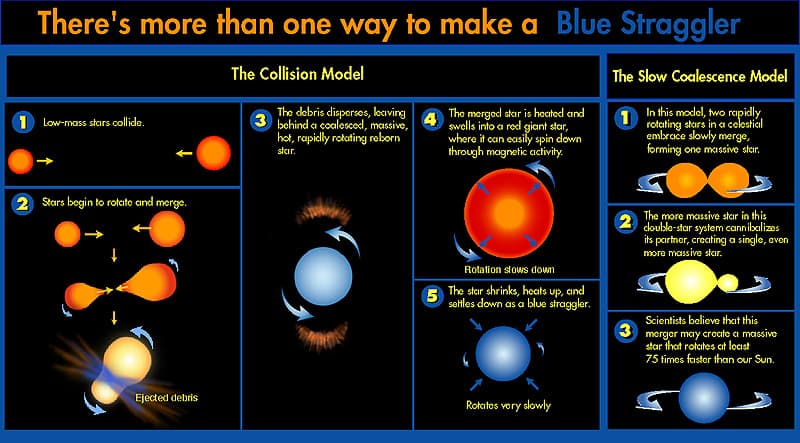 Vampires. Several hundred books have been written about them, they are now a viable love interest in movies and television shows, and some of them (apparently) sparkle. As much as I dislike the "Twilight" variety vampire, perhaps that's the one particular mythology that's relevant to vampire stars. Yep, you read that right; stars exist that last much longer than the usual expiration date by feeding on their stellar counterparts (it's probably a lot cooler than it sounds).

For decades, astronomers have been puzzled by the extended life-spans of extremely hot, metal-poor, blue-white stars located in globular clusters. These stars normally have a short life-span (cosmologically speaking) of a few hundred million years. Whereas, their counterparts, red and yellow dwarf stars (like our sun) generally remain in the main sequence portion of stellar evolution for a few billions of years. These "blue-stragglers" (as they are called) are peculiar stars indeed. While their neighbors are showing their age and nearing the end of their stellar life-spans, these stars still appear quite young and very hot. Why though? Something is certainly out of whack.

Astronomers have a few ideas. First, it was widely believed that these blue-stragglers are created by the collision of two stars. This theory was dispelled when astronomers looked at several blue-stragglers in 56 globular clusters and discovered that the total amount of the hot stars in the multiple clusters didn't match up to the predicted collision rate.

The second theory is that the blue-stragglers are galactic cannibals that munch on the materials ejected from one of their neighbors. This was reaffirmed by a study that took place in 2006 where astronomers examined 43 blue-stragglers in the global cluster 47 Tucanae. They discovered that six of them have considerably less carbon and oxygen than the rest of them. This discovery led astronomers to believe that the blue-stragglers were siphoning the materials from a companion, which assisted the star in burning hotter and brighter than it normally would.

Indeed, the latter theory is still holding up. In 2011 another study of 21 blue-stragglers in the NGC 188 cluster (a 7 billion year old cluster of 3,000 stars in the Cepheus constellation) observed that most of the blue-stragglers are in binary systems. Astronomers were able to see the wobble of the blue-straggler as its companion white dwarf (which isn't actually visible)  exerts gravitational influence on it. At first, they thought the process was a violent, spectacular event, but instead, the study of the SS Leporis binary system shows it is in fact a relatively slow, mysterious process that's taking place. Of which, we still don't have all of the answers to.

Astronomers are quick to point out that these blue-stragglers can probably be produced in other ways, but that's another story for a time when we know a bit more about them. Until then, enjoy this great GIF that takes the best look yet of blue stragglers sucking the material from a companion star: