A Huge Black Diamond From Space Is Officially Going on Sale

Sure, why the hell not. 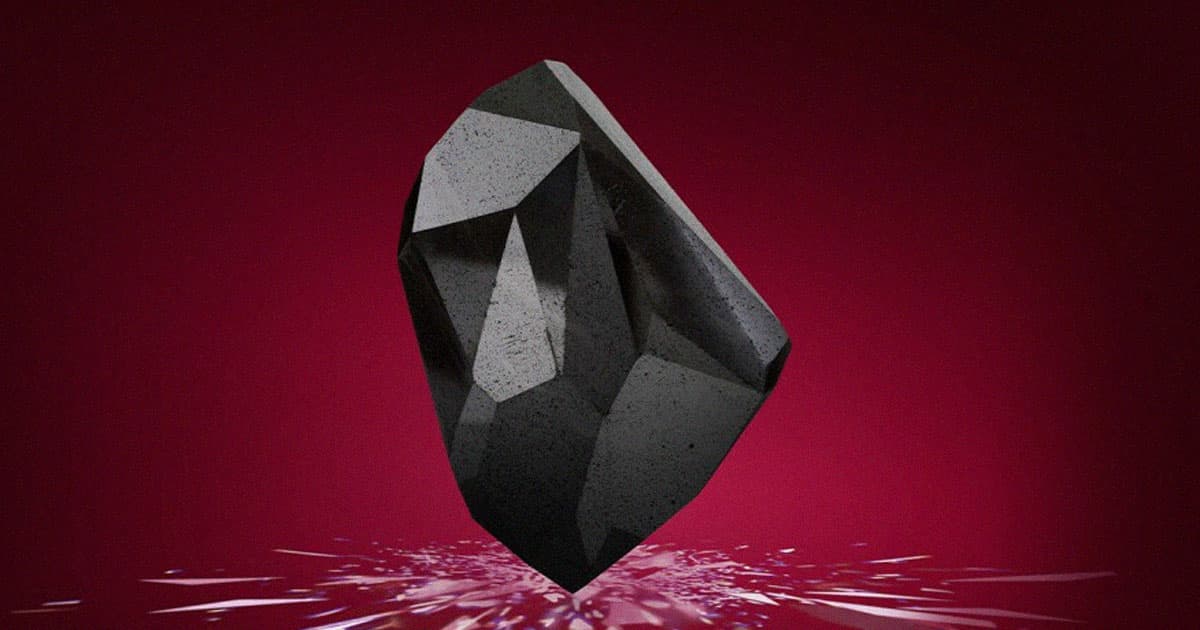 It's 2022, so really, there's no reason you shouldn't be able to buy a black diamond from space — and pay for it in crypto — right?

The auction house Sotheby's Dubai outpost is exhibiting and selling a 555.55 carat black diamond believed to be from "interstellar space" that's been dubbed "The Enigma."

According to Sotheby's — which, to be frank, has a pretty solid incentive to aggrandize this gorgeous specimen — the palm-sized black diamond is "thought to have been created either from a meteoric impact or having actually emerged from a diamond-bearing asteroid that collided with Earth." Just for good measure, it was also listed as the largest cut diamond in the world in 2006, when it made it into the "Guinness Book of World Records."

This 555 carat black diamond is going on sale, with an estimated sale price of 7 million. They are accepting #bitcoin.

Question is, would you be willing to part with your precious BTC for a sweet AF rock? pic.twitter.com/xs5l1dtRHJ

Another eyebrow-raising detail about the sale is that Sotheby's is allowing the diamond to be sold in cryptocurrency — a move the company calls a nod to "the fact that cryptocurrency has started to make its mark in the world of physical art and objects" after the auction house sold another rare diamond for $12.3 million in crypto last summer.

In a Barrons statement, Nikita Binani, a jewelry specialist and head of sale at Sotheby's London said that the diamond is "one of the rarest, billion-year-old cosmic wonders known to humankind."

The statement noted that origin story of "The Enigma" is also shrouded in mystery, as details of its discovery and cutting have not been released to the public.

Sotheby's isn't the only auction house that has taken to using digital currencies — Christie's also auctioned for crypto sale a Keith Haring painting with an estimated worth between $5 and $6 million.

Christie's has also delved into the world of non-fungible tokens (NFTs) and specifically into that of the Bored Ape Yacht Club. In December, the esteemed auction house sold four "Bored Apes" for a cumulative $2.84 million US dollars.

Between crypto officially entering the fine art world and space diamonds being sold on the blockchain, 2022 already feels way more futuristic than the trash fire that was 2021.

READ MORE: A 555.55-carat black diamond believed to come from space is going on sale [CNN]

More on space auctions: Startup Will Store Precious Artifacts in Vault Aboard the International Space Station

Read This Next
Mars Rock Blues
Mars Rock Samples Probably Won't Infect Earth With Deadly Martian Plague, Scientist Says
Space Race
Startup Will Store Precious Artifacts in Vault Aboard the International Space Station
More on Off World
Drama Bomb
Yesterday on the byte
European Space Agency Halts Plans to Send Astronauts to Chinese Space Station
Futurism
Yesterday on the byte
Asteroid Mining Startup About to Launch First Mission
Carry On, Wayward...
Yesterday on the byte
NASA Says Lucy Spacecraft Will Forge Ahead With Busted Solar Array
READ MORE STORIES ABOUT / Off World
Keep up.
Subscribe to our daily newsletter to keep in touch with the subjects shaping our future.
+Social+Newsletter
TopicsAbout UsContact Us
Copyright ©, Camden Media Inc All Rights Reserved. See our User Agreement, Privacy Policy and Data Use Policy. The material on this site may not be reproduced, distributed, transmitted, cached or otherwise used, except with prior written permission of Futurism. Articles may contain affiliate links which enable us to share in the revenue of any purchases made.
Fonts by Typekit and Monotype.