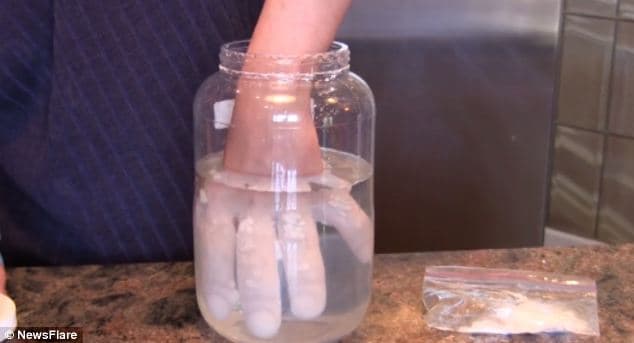 Recently, a scientist from the University of Toronto placed his hand in hot ice in order to show viewers what happens. The result? In seconds, the scientist's hand is covered by thick layer of this solid "ice."

It sounds rather horrifying. But fear not, no viewer discretion is advised. It only sounds awful if you don't know what hot ice is. In this case, the substance is actually made from molten sodium acetate. And don't let the "molten" scare you off; it's perfectly harmless (provided that you know what you are doing; do NOT try this if you are not familiar with the substance). Sodium acetate is normally solid at room temperature, and it melts into a liquid at 58° Celsius (136° F). So in order to make this experiment work, solid sodium acetate is melted into a liquid that is then supercooled to below its melting point. When the substance is in this state, adding nucleation sites (like what is found on the human hand) rapidly causes the rest of the sodium acetate to crystallize—The substance will surround your fingers and feel a little like the texture of ice cream.

During reactions, sodium acetate appears to freeze like "ice" as the cold solution turns from liquid to solid; however, this process is exothermic, meaning that the solid structure is warm to the touch.

Like this? Learn all about the PLANET that is coated in hot ice.