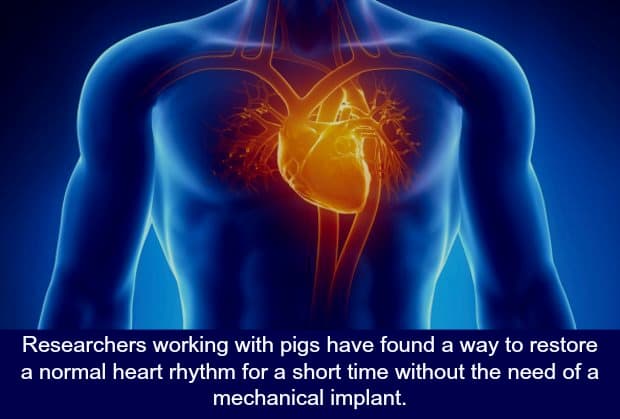 We all have a place for rhythm in our hearts... no really. Our blood-pumping organ keeps its beat thanks to a tissue cluster known as the sinoatrial (SA) node, our natural pacemaker that stimulates the contraction of heart muscle. Some individuals have a defective SA node and need to be fitted with an artificial pacemaker to regulate the electrical impulses. Researchers working with pigs have found a way to restore a normal heart rhythm for a short time without the need of a mechanical implant.

There is a steady growth in the use of dual-chamber pacemakers in the United States, with a 56 percent rise between 1993 and 2009. Implanting an artificial pacemaker is an invasive surgery and can be a dangerous operation depending on the health of the patient. While pacemakers are an effective way to regulate electrical heart defects, they can become faulty, have a limited lifetime and there is always the risk of an immune response to any artificial implant. A technique using gene modification has demonstrated that heart muscle cells in pigs can be transformed into pacemaker cells, potentially leading to artificial pacemakers becoming a thing of the past.

A Change of Pace:

Researchers at the Cedars-Sinai Medical Center simulated a critical human heart defect in 12 pigs. They used radio waves to disrupt the electrical signals from the animals’ SA node, slowing the pigs’ heartbeats from 100 beats per minute to 50. Then the scientists introduced a gene called TBX18 through a nominally invasive catheter packaged within an innate virus. A control group received fluorescent proteins in place of the modified virus to determine the efficacy of TBX18 in the test group.

After two days, the heart cells (the cardiomyocytes) treated with TBX18 began to regulate the pigs’ heart rate, exhibiting more beats per minute than the control group. The scientists monitored the heart rates as the pigs walked, slept and ate. Their improved heart rate was not hindered by the changes in physical activity and the stronger rhythm lasted for 14 days.

"We have been able, for the first time, to create a biological pacemaker using minimally invasive methods and to show that the biological pacemaker supports the demands of daily life," said Eduardo Marbán, director of the Cedars-Sinai Heart Institute, who managed the team.

Keeping to the Beat:

This experiment was the first to reprogram a heart cell in a living animal to achieve a temporary treatment for a disease. Despite the effect only lasting for two weeks, it could still prove helpful in advancing medical procedures. For instance, if a person’s artificial pacemaker fails, they can be temporarily sustained with TBX18 stimulation until a replacement device can be implanted. Marbán is also hopeful his findings can help with pre-natal care of unborn children with heart defects. It is not feasible to have a foetus fitted with an artificial pacemaker but the success of this gene therapy treatment might lead to a low-risk technique involving cell reprogramming similar to this experiment.

"Originally, we thought that biological pacemaker cells could be a temporary bridge therapy for patients who had an infection in the implanted pacemaker area," Marbán commented. "These results show us that with more research, we might be able to develop a long-lasting biological treatment for patients."

Pigs have hearts that are anatomically similar to the human organ, making them suitable subjects on the road to human testing. Marbán’s team hopes to be granted permission from the Food and Drug Administration in the US to plan a human trial, which could be just two years away from reality.

The study was published on July 16, 2014 in the journal Science Translation Medicine.