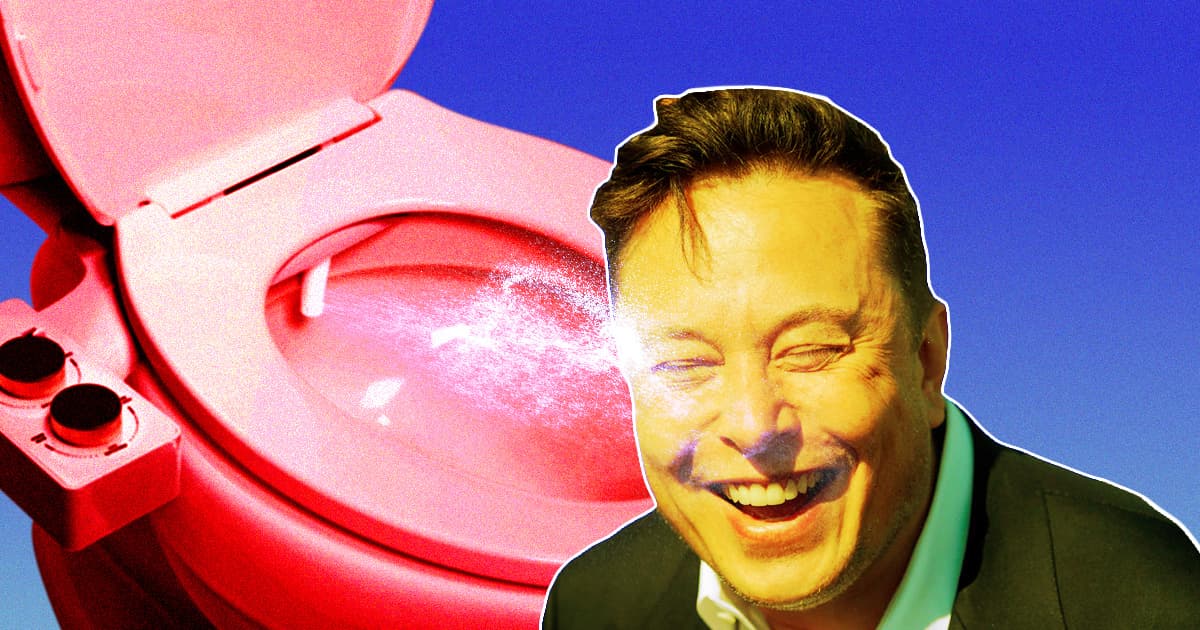 SpaceX CEO Elon Musk admitted this week that the space tourists on board the Inspiration4 mission had a bit of trouble with the toilet.

"Definitely upgraded toilets," Musk promised to another Twitter account suggesting heated toilet seats for the next mission. "We had some challenges with it this flight."

The news clearly has not gone unnoticed by Tushy, a popular bidet attachment company.

"Elon Musk, let us put a TUSHY bidet on the spaceship," the company suggested in a Wednesday evening tweet, accompanied by a simplistic sketch of what such a device might look like.

The diagram shows a cushioned seat with a retractable bidet attachment coming out of it, labeled as the "Tushy Ass Blast 9000." Two "Butt Blades" then suck up the excess floating droplets of poo water. A "Robo Sphincter" and "Slurp Chamber" then take care of the waste.

It's a hilariously crude vision — and judging by the tone of the accompanying statement, Tushy appears to be reveling in some good old fashioned bathroom humor.

"We heard you had some potty problems on the SpaceX Inspiration4 orbital mission," reads a tongue-in-cheek press release. "We sincerely recognize the gravity of this situation. Seriously, skid marks in a space suit isn’t a good look. We really wouldn’t want to be SpaceX’s dry cleaner."

"The Crew Dragon toilet supposedly has one hell of a view, but getting a front-row seat to the galaxy shouldn’t be overshadowed by having a dirty butt," the statement continues. "Let us put a bidet on your spaceship and really keep that shit clean."

But the Tushy Ass Blast 9000 may be more real than the company is letting on. Futurism reached out to the company's founder, Miki Agrawal, who told us that the company has thought through the dangers of contaminated droplets floating around the cabin in microgravity.

"In our initial design, the TUSHY Ass Blast 9000 is positioned so close to the butthole, spraying with such powerful force, followed by state-of-the-art vacuum hose to recover the water used," Agrawal told us. "Our engineers have discussed a water filtration system to ensure it’s as hygienic as possible."

Why use a bidet in space when toilet paper and wipes are readily available to astronauts? Agrawal claims that using dry toilet paper "is not only ineffective but exacerbates chronic health issues like UTIs, hemorrhoids and yeast infections."

She also made a connection to the ongoing COVID-19 pandemic, pointing out research showing that pathogens can be spread through fecal matter.

"It’s more top of mind to be clean everywhere, especially the dirtiest part of our body," she told Futurism. "We would not want people infecting each other in space either."

More on bidets: Scientists Working on Toilet That Identifies You by Your Butthole

Read This Next
Shot Well
Head of NASA Relieved to Hear Elon Musk Isn't REALLY Running SpaceX
Makeover Scene
Space Tourist Says He's Thinking About Flying SpaceX Craft Up to Fix Hubble
Grain of Salt
There's a Huge Problem With Elon Musk's Promise to Bring Starlink to Iran
Sluggo Mode
SpaceX Has a Major Problem With Its Starlink Internet Connections
Dumpster Fire
SpaceX Tested Starship's Engines and Accidentally Caused a Large Fire
More on Off World
No More Hops, Mor...
Yesterday on the byte
Suggestion: NASA Should Make Its Mars Helicopter Do Some Gnarly Tricks From "Tony Hawk"
Exoplanet Dance
Tuesday on the byte
Scientist Releases Amazing Video of Exoplanets Orbiting Distant Star
Space Junk News
Tuesday on the byte
Two Large Chunks of Space Debris Just Almost Collided in an Epic Disaster
READ MORE STORIES ABOUT / Off World
Keep up.
Subscribe to our daily newsletter to keep in touch with the subjects shaping our future.
+Social+Newsletter
TopicsAbout UsContact Us
Copyright ©, Camden Media Inc All Rights Reserved. See our User Agreement, Privacy Policy and Data Use Policy. The material on this site may not be reproduced, distributed, transmitted, cached or otherwise used, except with prior written permission of Futurism. Articles may contain affiliate links which enable us to share in the revenue of any purchases made.
Fonts by Typekit and Monotype.