"If Mr. Bezos wants to go to the Moon, good for him. He has $186 billion in personal wealth. 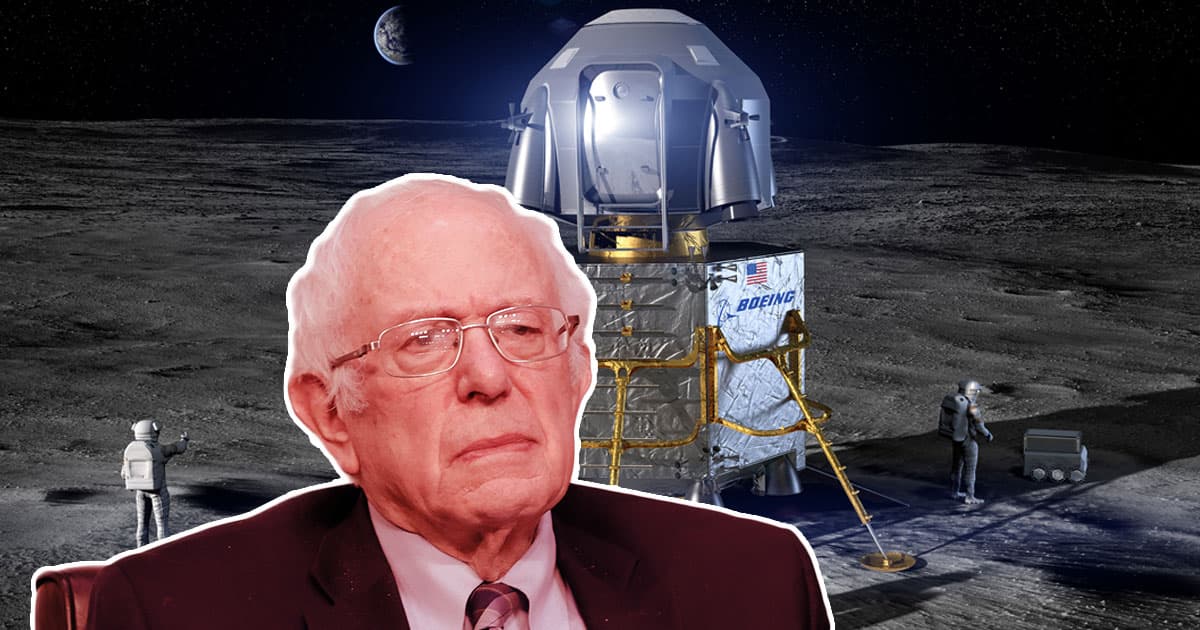 To Sanders, it's a bailout of the second richest man in the world. To others, it's fair competition in the agency's extremely costly endeavors to return humans to the Moon for the first time since the early 1970s.

Given the many twists and turns involved, here's a primer on how we got to today. Last year, NASA made SpaceX the sole winner of a multibillion dollar contract to develop a lunar lander.

Blue Origin, however, argued it was being unfairly locked out of the process, suing NASA last August.

Then last week, NASA opened the process back up again, giving Blue Origin one more chance to be nab a contract to develop its lunar lander. The agency also announced SpaceX had won a second contract for yet another trip to the lunar surface.

But Sanders is looking to get in the way of Bezos securing taxpayer money, with a resolution meant to prevent the allocation of an additional $10 billion. According to the resolution, the measure is "a bailout to Jeff Bezos so that his company Blue Origin can launch a rocket ship to the Moon," as quoted by Politico.

"If Mr. Bezos wants to go to the Moon, good for him," Sanders told the Senate last week. "He has $186 billion in personal wealth. He became $81 billion richer during the pandemic. He is the second richest person in America."

Sanders argued at the time that he should "use his own money, not US taxpayers'."

That's ironic, of course, because Sanders has frequently been an antagonist of SpaceX CEO Elon Musk. Now, though, the two are odd bedfellows in opposing Bezos' lunar ambitions.

It's worth noting, though, that not everybody sees NASA's change of heart as a bailout.

"We are seeing the association of spaceflight with divisive individuals being used to drive somewhat unrelated policy issues," Casey Dreier, senior space policy adviser at The Planetary Society, told Politico, adding that Bezos is actually "losing money on this."

The Artemis program is a private-public partnership of epic proportions in the space industry that stands a good chance of resulting in the first astronauts landing on the lunar surface in almost half a century.

But it's also extremely expensive. Even with pockets as deep as Bezos', space companies are looking obtain funds from US taxpayers, a controversial move given the billionaire's existing wealth.

More on lunar missions: NASA Employee Says SpaceX's Starship Is About to Change Everything

Read This Next
Shot Well
Head of NASA Relieved to Hear Elon Musk Isn't REALLY Running SpaceX
Pale Blue Shat
William Shatner Explains Why His Trip to Space Was Horrible
Overview Effect
William Shatner Says His Space Trip Left Him With a Feeling of Terrible Grief
Makeover Scene
Space Tourist Says He's Thinking About Flying SpaceX Craft Up to Fix Hubble
Grain of Salt
There's a Huge Problem With Elon Musk's Promise to Bring Starlink to Iran
More on Off World
Light Me Up
Yesterday on the byte
Wall of Lasers Cuts Across Hawaii's Night Sky
Water Sign
Yesterday on the byte
Scientists Find New Evidence of Hidden Ocean World in Our Solar System
Trashing Orbit
Thursday on the byte
Elon Musk Says SpaceX May Build Starship That Dies on Purpose
READ MORE STORIES ABOUT / Off World
Keep up.
Subscribe to our daily newsletter to keep in touch with the subjects shaping our future.
+Social+Newsletter
TopicsAbout UsContact Us
Copyright ©, Camden Media Inc All Rights Reserved. See our User Agreement, Privacy Policy and Data Use Policy. The material on this site may not be reproduced, distributed, transmitted, cached or otherwise used, except with prior written permission of Futurism. Articles may contain affiliate links which enable us to share in the revenue of any purchases made.
Fonts by Typekit and Monotype.