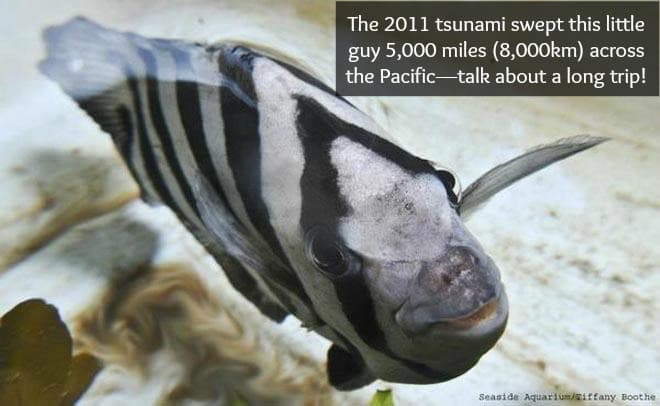 On Friday 11th March, 2011, a magnitude 9.0 earthquake struck 70km off the coast of Japan. Geologists called the fault slip an 'undersea mega-thrust', as it is estimated that the Eurasion plate rebounded upwards by 5-8m along a 180km stretch where it is subducting the Pacific plate. The upthrust displaced a vast volume of water that resulted in a devastating tsunami that in some places grew to 40m high and reach up to 10km inland. The Japanese National Police reported the confirmed deaths of 15,900 people, and a total economic damage of US$235 billion.

The destruction resulting from the earthquake and tsunami is completely immeasurable, and as the waters receded they dragged approximately 5 million tons of debris into the Pacific Ocean - carried by currents and the wind. An array of various forms of debris have been washing up in Alaska, British Columbia, the US West Coat and the Hawaiian islands since the event. However, in March, 2013, it may be argued that possibly the strangest floating item washed up onto the shores near Long Beach, Washington.

When the 18-foot/5.5 metre boat arrived there wasn't much attention given to it, and though it was larger than most of debris that washed ashore, this sort of thing hadn't been uncommon. Upon closer inspection this rather unimpressive skiff actually was actually its own mini ecosystem - housing an array of plant life, invertebrates. Still, this wasn't unique. What made the boat so special was that it was home to live fish. These weren't native fish that had hitched a ride in the waters close to the US either; they were an entirely foreign species to the East Pacific.

The boat, identified as Japanese from its registration number and called 'Saisho-Maru', was home to algae, seaweed, marine worms, crabs, five fish and even a sea cucumber! The boat wasn't large, and despite being partially submerged for most of its journey, it was remarkable that it didn't sink. Allen Pleus from the Washington Department of Fish and Wildlife, said ''It had a nice 20-to-30-gallon aquarium intact at the back''. This ''little cave'' provided a place for the fish to hide from predators during the most epic voyage ever undertaken by a fish (besides Nemo's dad).

Sadly, of the handful of original fish discovered as stowaways, only one survived and is now residing at Oregon's Seaside Aquarium. Since the fish was not a native species, it took some time for marine biologists to identify both the fish and its appropriate diet. Thankfully it was classified as a striped beakfish (also known locally as a barred knifejaw), typically found in tropical waters around the West Pacific. So how on Earth did it get here?

The fish and its counterparts had a minimum of 4,800 kiolmetres/3,000 miles (Hawaii to Washington) to travel in the two years since the tsunami - talk about a long trip! How could a fish survive such a long journey? Pleus suggested that the fish lived in a small 'tank' in the boat which provided a stable volume of water to live in (away high waves of the open ocean) and protection from both marine and air-bourne predators mistaking the ship for a floating lunch box.

So it's possible that the fish had a refuge from predators but how did it survive starvation? Pleus believes that the vast array of life on the boat created and supported its own micro-ecosystem, where crashing waves would bring in new oxygen and nutrient-rich water into the boat, sustaining the flora and fauna. When the fish were hungry, they could leave their tank to 'hunt' in other areas of the boat and return at night for safety.

Now the question of where the fish originated from is even more intriguing! Biologists decided to guess its age, determining the fish was less than a year old. If the boat never went to Hawaii and the other organisms were nearly completely native to the Japanese/Chinese region region, then where did they come from?

The fish might actually be a descendant of that first intrepid - or unintentional - explorer and most likely spent its entirely life inside the little boat! The biologists suspect this is not the likely scenario and instead believe the fish was swept in from Hawaii. Though this may remove some of the story's magic, but Hawaii is still a good distance away from the US West Coast. For any fish to survive the open ocean in such a flimsy boat is an amazing feat!

The next concern for biologists is the invasion and spread of foreign species as a result of tsunamis. Pleus said, ''You get these sort of Noah's Arks of large docks that come in with huge assemblages of species, and they're definitely a threat. When you look at the number of smaller debris with fewer organisms and if you put it all together, it's an equal or possibly even greater threat than the really large objects that come to shore.'' This fish changes the way we think about how species can move about.

Tsunami frequency may not increase, but the amount of debris entering our waters as a result of them most likely will. Therefore it is vitally important we understand how debris moves throughout the oceans and whether the spread of foreign species to new areas is more common than we think.