Be A Scientist At Home! 5 Experiments you can do under your own roof. 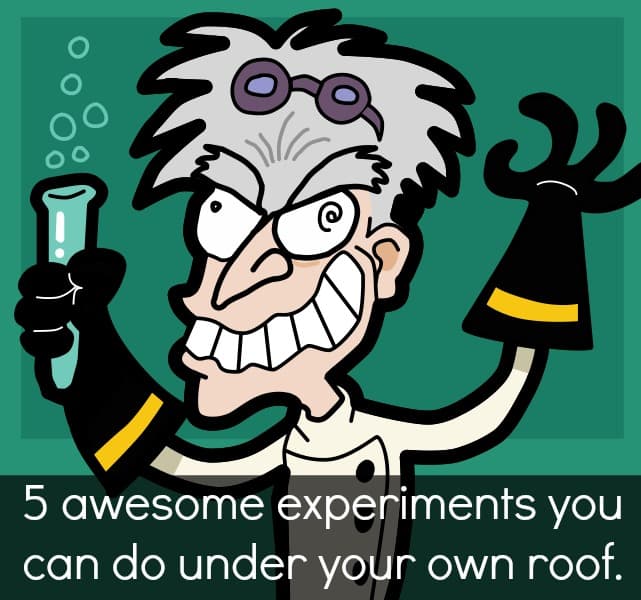 Today, when people say someone is a scientist, we usually think of someone socially awkward in a white lab coat creating monsters, performing crazy experiences, studying all day and having no life, anyway that is what I think of at least. But being a scientist doesn't necessarily mean you are working as one. The world is filled with people who are not professional scientists, but that still are scientists at heart. Being a scientist isn't just a job, it's a definition of who you are. And this can be proved: here is a series of cool and simple experiments to do at home (I'll skip over coke & mentos and the vinegar volcano) that will turn all of you into scientists by passion (and/or boredom).

Behaving unlike other fluids, oobleck is a non-Newtonian fluid. When it flows freely, it behaves like a regular fluid, but when a force is applied, oobleck acts as a solid. So if you make lots of it, you could even walk on it! (And if you decide to let your anger out, I would suggest another target than oobleck). Now something else that you can do with oobleck is making it dance: If you wrap your subwoofer with a plastic foil and put the oobleck on it, you will notice it will dance beautifully when you'll turn the music on because it will become solid.

To make oobleck, you will need:  1 part of water for 2 parts of corn starch. You could also add a few drops of food colouring. Once you add the water and corn starch, all you have to do is stir. With the food colouring, there are some options: you could add it in the beginning to create a uniform mix, but you could also add the colouring when you put the ready oobleck on your foiled subwoofer and see the colouring mixing playfully with the oobleck.

See the result of the dancing oobleck here and the making of it and demonstrations of its weird behaviour here. Walking and running in a pool of oobleck (if you're REALLY passionate).

Another must-do experiment is try growing crystals. Growing crystals is not just science, but art too. Practice is an important factor and so is luck. It's very simple to do and the result is just beautiful. You will need  a supersaturated solution, a jar, a pencil or a pen, a string, and a paper clip. To create the solution, you will need water and sugar: 3 parts of sugar for 1 part of water. You'll have to dissolve the sugar in the water by slowly dropping small amounts of it into boiling water and mixing it without stopping. Once all of the sugar will be dissolved, you will get a viscous liquid. Once the supersaturated solution is created, poor it into the jar. Then, take the pen or pencil and tie a string to it, to the string you tie the paper clip. The string's length depends on the jar, but note that the paper clip, when hanging in the jar, shouldn't touch the bottom. You can put a cloth or a paper on the jar to keep dust out (that's for when you become a pro, when such small details really make a difference). Leave the jar in a quiet space with not much movement (vibrations may disturb crystal formation) for three to seven days.

Now let's take this experiment to a whole different level: As we use sugar to make the crystals (you could use alum or salt too), we could eat them! Eating sugar alone isn't really fun, but while making the supersaturated solution, you could add some fruit extract (citrus or orange, whatever you like!) so when the crystal will be done, you will actually have candy! This is so cool, I know, but don't go crazy either, I don't want all of you to get fat because of me.

The next thing I'll show you how to do is an unpoppable bubble mix. Okay, I'll be honest here, if you use this mix, the bubbles will

still pop, so they're not unpoppable, but you will notice that they won't just pop in the air as the usual ones do, they will just keep flowing in the air. To make this you will need 1,4 litres of distilled water, 235 ml  of light corn syrup, 470 ml of regular strength Joy liquid dish soap (doesn't HAVE to be Joy, could be any detergent, but Joy is preferred), large bowls and, of course, bubble wands. Mix all of these slowly in a bowl (so you won't make bubbles) and then let it rest for a day. Then you just dip your want in and let the magic of science do its work. Also, you can take advantage of the cold weather by making ice bubbles! (blow the bubbles in the cold so they would freeze).

You're probably asking yourselves why we need distilled water. The answer to that question is that minerals found in tap water may alter the bubbles' performance, which is why using distilled water is very important.

4. The Bouncy And Naked Egg

The next experiment we'll do is the bouncy egg experiment. To make it, you will need two jars/glasses with lids, two eggs (one boiled, one raw) and enough vinegar to cover them both. So you put each egg in a jar or a glass (labelling them would be smart) and you add vinegar so they will be totally covered in it. Then you close the lid or put paper over the glass. Little bubbles will appear on the eggs. It happens because the egg's shell and the vinegar react together: egg shell contains calcium carbonate which reacts with vinegar like baking soda and vinegar. If you use brown eggs, you will notice the shell coming off by the end of the first day (this phenomenon will be harder to see with white eggs). Also you will see that the raw egg will be larger (because it will absorb some of the vinegar). Use the raw egg to

make the naked egg. To do that, you will have to change the vinegar the second day and after 48 hours, take the egg out and rinse it carefully: you will have an egg without its shell. During this time, the hard egg is still in vinegar. Leave it in there for at least three days. Once time elapsed, take it out and rinse it in water. Take the rest of the shell off carefully, and you'll get the bouncy egg. It will bounce if you drop it (not from the top of a building). You can also add food colouring into the vinegar and make your eggs colourful!

These experiments above were not very dangerous, so I think the last one should be: Let's play with fire! Take a piece of cloth... but if we play with fire, let's make it even more dangerous: take some money, one bill will suffice and pour rubbing alcohol on it, and don't be cheap on the alcohol if you want your bill to survive! Before lighting it, I would suggest you taking the bill with tongs, as fire is hot. Also be careful not to burn your whole house down. So once you hold the alcohol soaked bill with tongs, you can light it and let it burn and once all the alcohol will evaporate, your bill will be left unharmed! Have fun!

Disclaimer: From Quarks to Quasars is not responsible for damages or injuries that result from these experiments. Perform them at your own risk. Please be safe!