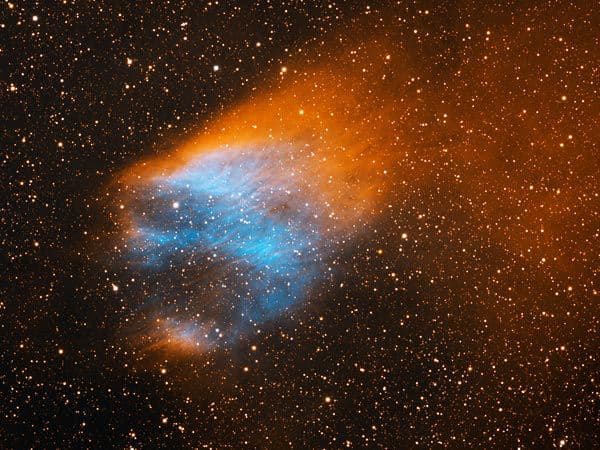 What do you see in this newly released image from the Kitt Peak National Observatory? Personally, I see a demented Pac-Man-like creature.

This elderly planetary nebula is an estimated 45,000 years old. Planetary nebulae (one of the final phases of stellar evolution for a sun-like star) form after medium sized stars burn the remainder of hydrogen fuel forged at their core for nuclear fusion. After which, they burn helium, causing them to balloon in size. Eventually, the remainder of the mass will condense into a white-dwarf -- a dense remnant that is similar in size to Earth, with the outer envelope of gases shedding off into space, forming a nebula, which will eventually dissipate entirely.

Sharpless 2-68 (or Sh2-68), as it's called, contains quite a bit of ionized oxygen atoms (pictured in blue), while the diffuse orange emission is the result of the nebula's journey through the disk of our galaxy. At the center (in the blue haze) is the star responsible for the nebula's existence.