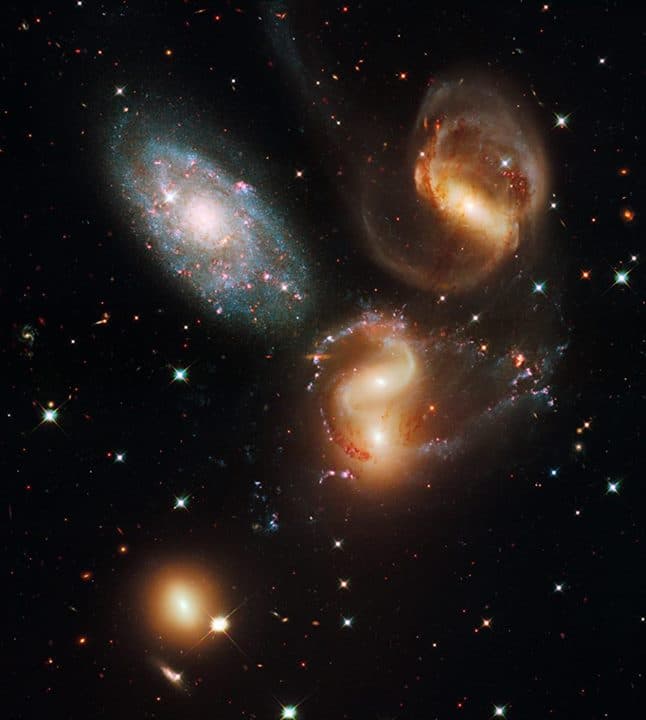 This is an extremely compact galaxy group known as Stephan’s Quintet; it is located about 300 million light-years from Earth and is the first compact galaxy group ever discovered. All five galaxies in Stephan’s Quintet were originally thought to be interacting with each other. Later surveys revealed that one of the galaxies, NGC 7320 (the large galaxy pictured in the furthermost left-hand corner) is actually about seven times closer to Earth than the rest of the group, lying at a distance of only 40 million light-years.

Moving in a clockwise direction from NGC 7320, the first galaxy we come to is NGC 7319, which is a barred spiral galaxy.

The next galaxy seems to have two galactic cores; this is because it is actually two separate galaxies that orbit extremely close to each other. They are NGC 7318b (on the top) and NGC 7318a (on the bottom).

Finally, the furthest member of this cluster is NGC 7317, pictured near the bottom left side of the image.

The interacting galaxies also tend to be warped and distorted because of the gravitational forces exerted on it by the other galaxies. This image spans a distance of about 500,000 light-years. Not pictured here is another galaxy, NGC 7320C, which is located to the top-right of the cluster. NGC 7320C is also about 300 million light-years away and may be a part this cluster. If that is the case, Stephan’s Quintet will remain a quintet in both name an actuality.