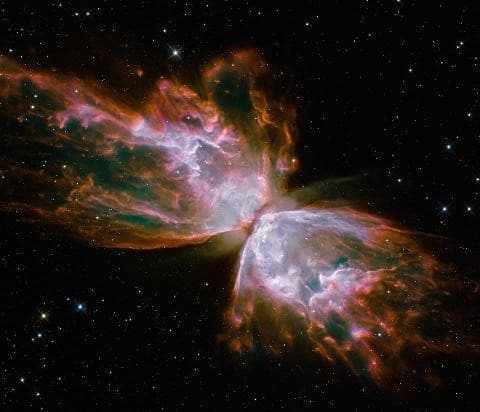 This brilliant planetary nebula, called the Butterfly Nebula or NGC 6302, can be found in the constellation of  Scorpius about 3,800 light-years from Earth.

This nebula was originally called the Bug Nebula. That was before the Hubble images released in 2009 revealed that the nebula actually resembles a butterfly more closely. Of course, it wasn’t long before the name (and a more suiting name, if I say so myself) caught on.

The star responsible for creating this stunning shape is found near the center of the butterfly. It is hidden from view by a dark dust lane. Believe it or not, the star itself is estimated to be medium-sized (similar to our Sun), as the star runs out of fuel for nuclear fusion, it ejects its outer layers off into space.

These outer layers go on to create the nebula. The dying star floods the nebula with ultra-violet light; this causes the nebula to glow and also helps to give it a spectacular shape.

The wings of the butterfly are expanding at speeds exceeding 966,000 kilometers per hour. This quick pace has allowed the nebula to quickly expand to its current size. The nebula, being nearly 3 light-years across, covers three-quarters of the distance between the Sun and our closest star.

The Butterfly is peppered with pillars, regions where dense clumps of dust resist the solar winds sweeping over the structure at nearly 3.2 kilometers per hour.

Just like everything in the universe, the butterfly won’t last forever. The nebula itself is about 2,200 years old, as the central star cools and turns into a white dwarf, the Butterfly will fade from view. This is expected to happen in less than a hundred thousand years.