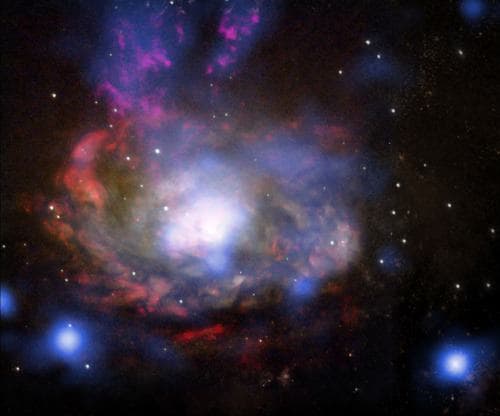 Chandra - along with ESO's Very Large Telescope Array - spied a bright, variable supernova blast located in a galaxy 12 million light-years away. This image is a composite showing the central region of the galaxy in question, which is typically referred to as the Circinus galaxy.

In the lower right hand corner of the image, the blue source of light is the supernova blast itself (designated 'SN 1996cr'). It was originally discovered back in 2001 (though the light from the actual explosion arrived more than a decade before it was even discovered). Despite there being so many stars in the night sky, it's pretty infrequent that we observe these celestial events in independent galaxies. By some estimations, one should expect to see one supernova explosion once every 50 years per galaxy! The last verified explosion in the Milky Way was observed back in 1604 by the famed astronomer, Johannes Kepler (many other contenders have been noted in recent years though).

Furthermore, some of you may recall the famous supernova SN 1987A, which occurred in a galaxy approximately 160,000 light-years away -- It's quite similar to supernova SN 1996cr in many ways, but SN 1996cr spits out almost 1000 times more radio and x-ray emissions.