Astronomers Probe An Old-looking Galaxy in a Young Universe 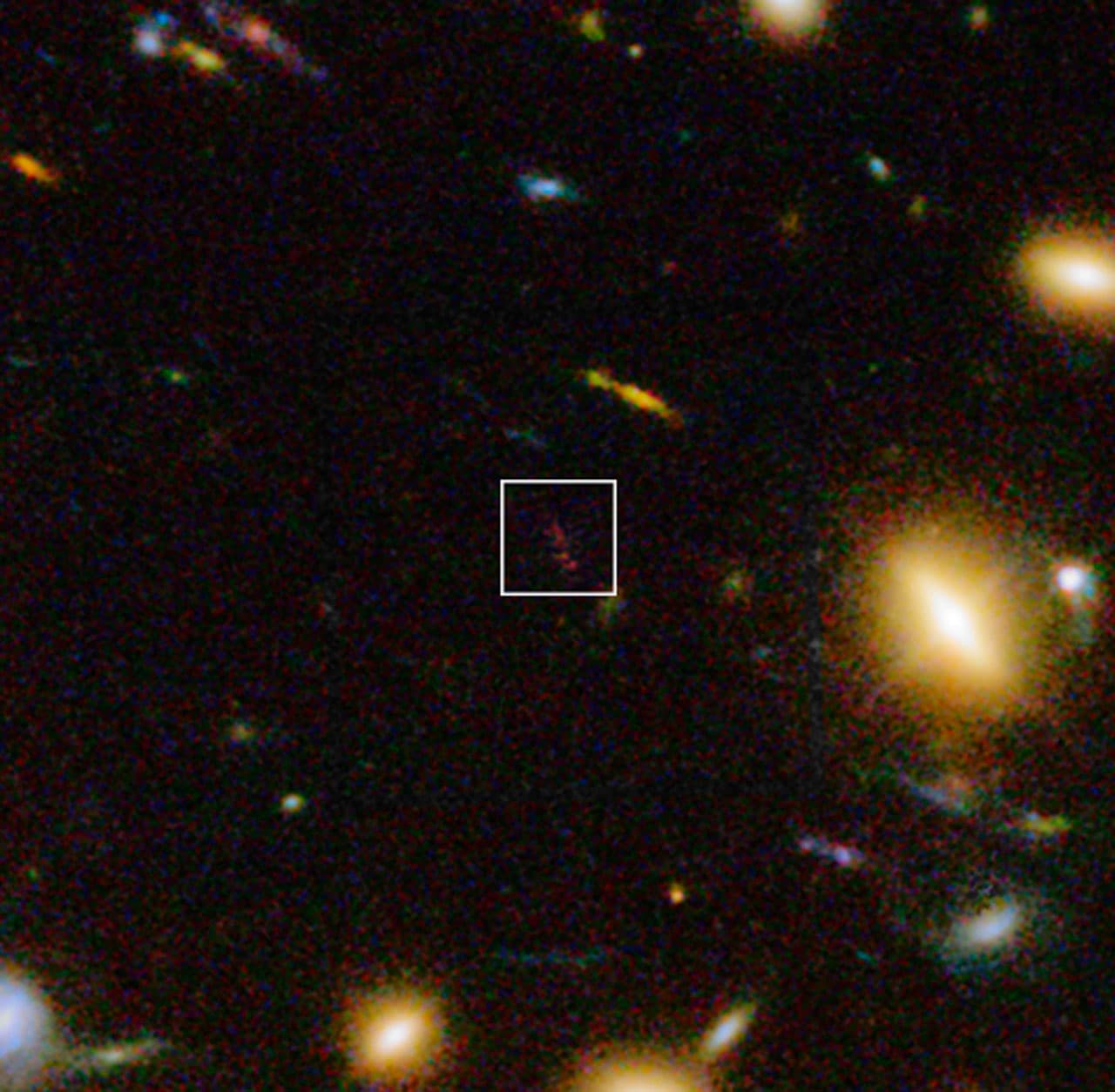 A team of astronomers, led by Darach Watson from the University of Copenhagen, used the Very Large Telescope’s X-shooter instrument along with the Atacama Large Millimeter/submillimeter Array (ALMA) to observe one of the youngest and most remote galaxies ever found. They were surprised to discover a far more evolved system than expected. It had a fraction of dust similar to a very mature galaxy, such as the Milky Way. Such dust is vital to life, because it helps form planets, complex molecules and normal stars.

The target of their observations is called A1689-zD1. It is observable only by virtue of its brightness being amplified more than nine times by a gravitational lens in the form of the spectacular galaxy cluster, Abell 1689, which lies between the young galaxy and the Earth. Without the gravitational boost, the glow from this very faint galaxy would have been too weak to detect.

We are seeing A1689-zD1 when the Universe was only about 700 million years old — five percent of its present age. It is a relatively modest system — much less massive and luminous than many other objects that have been studied before at this stage in the early Universe and hence a more typical example of a galaxy at that time.

A1689-zD1 is being observed as it was during the period of reionization, when the earliest stars brought with them a cosmic dawn, illuminating for the first time an immense and transparent Universe and ending the extended stagnation of the Dark Ages. Expected to look like a newly formed system, the galaxy surprised the observers with its rich chemical complexity and abundance of interstellar dust.

“After confirming the galaxy’s distance using the VLT,” said Darach Watson, “we realised it had previously been observed with ALMA. We didn’t expect to find much, but I can tell you we were all quite excited when we realised that not only had ALMA observed it, but that there was a clear detection. One of the main goals of the ALMA Observatory was to find galaxies in the early Universe from their cold gas and dust emissions — and here we had it!”

This galaxy was a cosmic infant — but it proved to be precocious. At this age it would be expected to display a lack of heavier chemical elements — anything heavier than hydrogen and helium, defined in astronomy as metals. These are produced in the bellies of stars and scattered far and wide once the stars explode or otherwise perish. This process needs to be repeated for many stellar generations to produce a significant abundance of the heavier elements such as carbon, oxygen and nitrogen.

Surprisingly, the galaxy A1689-zD1 seemed to be emitting a lot of radiation in the far infrared, indicating that it had already produced many of its stars and significant quantities of metals, and revealed that it not only contained dust, but had a dust-to-gas ratio that was similar to that of  much more mature galaxies.

“Although the exact origin of galactic dust remains obscure,” explains Darach Watson, “our findings indicate that its production occurs very rapidly, within only 500 million years of the beginning of star formation in the Universe — a very short cosmological time frame, given that most stars live for billions of years.”

The findings suggest A1689-zD1 to have been consistently forming stars at a moderate rate since 560 million years after the Big Bang, or else to have passed through its period of extreme starburst very rapidly before entering a declining state of star formation.

Prior to this result, there had been concerns among astronomers that such distant galaxies would not be detectable in this way, but A1689-zD1 was detected using only brief observations with ALMA.

Kirsten Knudsen (Chalmers University of Technology, Sweden), co-author of the paper, added, “This amazingly dusty galaxy seems to have been in a rush to make its first generations of stars. In the future, ALMA will be able to help us to find more galaxies like this, and learn just what makes them so keen to grow up.”