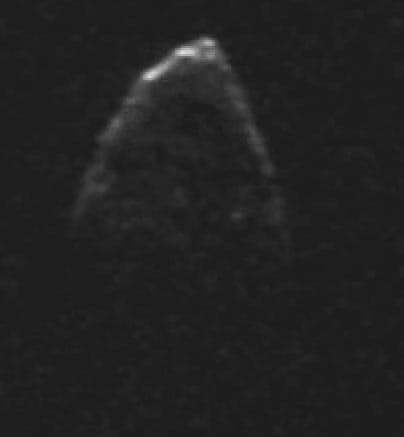 This is the near-Earth asteroid 1950 DA, and has been a very interesting target for astronomers at the University of Tennessee. In fact, when astronomers first looked at the asteroid's motions, they seemed impossible. Like most small asteroids (and even many big ones), 1950 DA is really a loose collection of rubble held together by gravity, BUT, interestingly enough, the asteroid spins so rapidly that gravity is not strong enough to hold it together. Another, stronger force must be present.

As Dr. Ben Rozitis from UT stated more scientifically, “We found that 1950 DA is rotating faster than the breakup limit for its density. So if just gravity were holding this rubble pile together, as is generally assumed, it would fly apart. Therefore, interparticle cohesive forces must be holding it together." In fact, if gravity was the only force acting on the asteroid, the equatorial region of the asteroid would experience a negative gravitational force. If you were to stand on the surface, you would be flung into space (unless you were tethered to the surface in some way).

So, either our entire understanding of gravity is completely wrong or there is something going on. As it turns out, the asteroid is being held together by cohesive forces called "van der Waals," a force that has been predicted for some asteroids, but hasn't been seen before now. The long, boring, textbook definition for the van der Waals force is...

The attractive or repulsive forces between molecular entities (or between groups within the same molecular entity) other than those due to bond formation or to the electrostatic interaction of ions or of ionic groups with one another or with neutral molecules. The term includes: dipole–dipole, dipole-induced dipole and London (instantaneous induced dipole-induced dipole) forces. The term is sometimes used loosely for the totality of nonspecific attractive or repulsive intermolecular forces.

More simply, van der Waals forces are interactions that occur between particles or molecules. They are very weak but are strong enough to hold the asteroid together. This observation helps to give scientists a key insight into the way asteroids are constructed.

As Rozitis pointed out, "Following the February 2013 asteroid impact in Chelyabinsk, Russia, there is renewed interest in figuring out how to deal with the potential hazard of an asteroid impact. Understanding what holds these asteroids together can inform strategies to guard against future impacts." Some ideas to prevent an asteroid from impacting the Earth include a kinetic impactor, which could cause the van der Waals forces to destabilize and turn the asteroid into a buckshot.

In the end, the more we know about asteroids, the better it'll be for humanity in the long run.

This post has been updated to include a more accurate title.