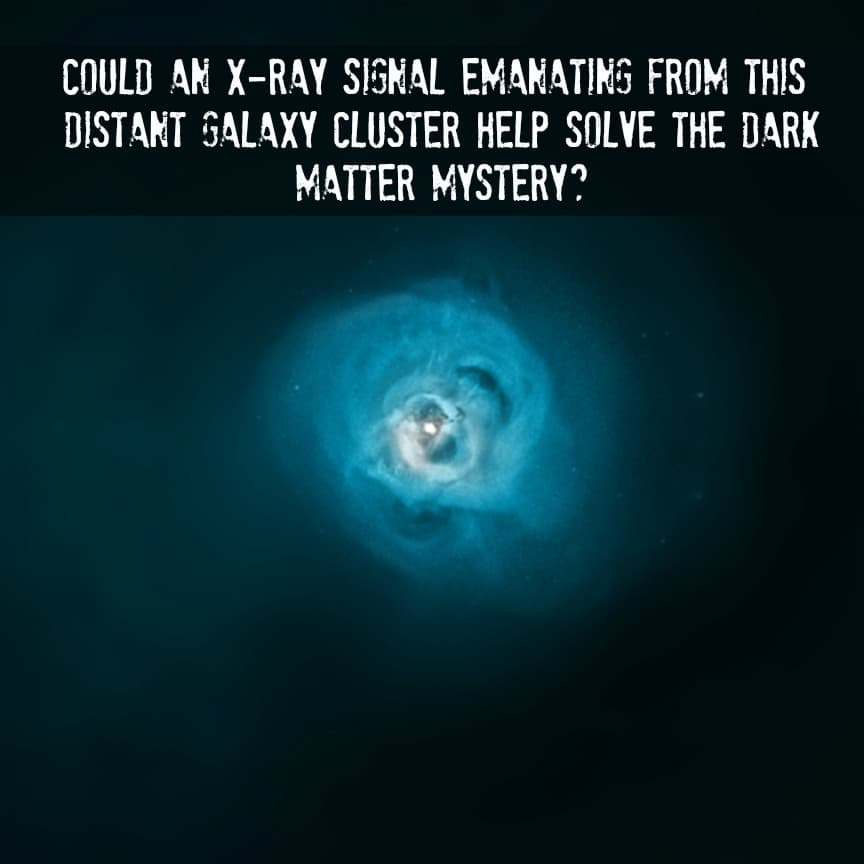 Astronomers are puzzled after witnessing a mysterious X-ray signal originating in a cluster of galaxies. With the help of NASA's Chandra X-ray Observatory and ESA's XMM-Newton, astronomers predict this enigmatic signal is the result of sterile neutrino decays — and could even be the first direct observations of dark matter. These initial findings still need to be confirmed, and all other explanations ruled out.

Dark matter is believed to make up at least 85 percent of the Universe, but does not emit or absorb light like traditional matter. As such, scientists have to observe dark matter through indirect methods. The results from the Chandra/XMM-Newton study reveal a spike of intense X-rays at a very specific wavelength never before observed. This strange emission line was discovered in the Perseus galaxy cluster as part of a study of 73 different galaxy clusters. Esra Bulbul, principal investigator from the Harvard Center for Astrophysics (CfA) said:

"We know that the dark matter explanation is a long shot, but the pay-off would be huge if we're right. So we're going to keep testing this interpretation and see where it takes us."

Sterile neutrinos are hypothetical particles predicted to interact with normal matter only through gravity and could be a partial explanation for dark matter. The team is very excited even at the remote possibility of detecting this type of particle. If they are correct in their discovery, this data does not prove that all dark matter is a comprised of sterile neutrinos, nor does it prove that the particles are the cause of this strange emission discovery as the detection pushes the limits of both observatories sensitivities. The team's observation indicate that the emission could be produced by normal matter, but in order for that to happen, the atomic physics of superheated gases would have to change significantly.

"Our next step is to combine data from Chandra and JAXA's Suzaku mission for a large number of galaxy clusters to see if we find the same X-ray signal, said Adam Foster, also of the CfA team. "There are lots of ideas out there about what these data could represent. We may not know for certain until Astro-H launches, with a new type of X-ray detector that will be able to measure the line with more precision than currently possible."

Galaxy clusters, like Perseus, contain hundreds of galaxies as well as massive quantities of super-heated gas to fill the space in between galaxies. After measuring the cluster's gravitational properties, show that the gas and the clusters only account for approximately one fifth the mass so the majority of mass must come from dark matter. The gas within the cluster is predominately Hydrogen and at temperatures of over 10 million degrees Celsius, is hot enough to "shine" in the X-ray portion of the spectrum.

The results of this study can be found in the peer reviewed database, arXiv, and will have significant implications if their findings are confirmed. After the results were published, a similar emission line with the same energy level was discovered in another study and strengthens the team's claims. More studies of galaxy clusters with Chandra, XMM-Newton and other higher-energy telescopes are necessary before anything can be confirmed.