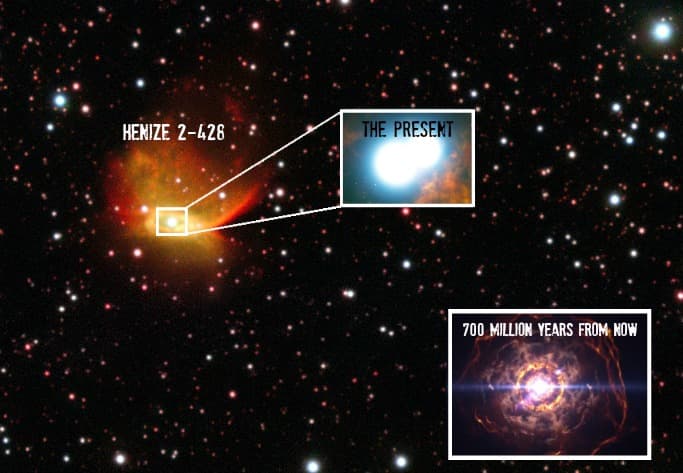 By most accounts, our solar system is pretty harmonious. The inner planets silently circle the Sun, tracing the same path over and over again, while the environment in the outer solar system is much more chaotic; among the major planets are an extraordinarily diverse array of orbiting satellites, effectively making each planet a miniature solar system.

We've encountered many planetary systems that aren't quite so serene: distant reaches of space where multiple planets lurk within close proximity to multiple stars; systems in which stars and planets are nearly the same size; and objects that are so intimately entangled with a black hole's gravitational pull, they are slowly being ripped apart.

Now, researchers from Madrid have come across an ill-fated star system comprised of two white dwarfs — incredibly dense, compact objects that are roughly the same size as Earth, but with the Sun's mass — that are destined to merge.

This particular pair have a combined mass of 1.8 Suns, which makes them the most massive white dwarf pair found to date — so massive, in fact, that when they inevitably converge,  astronomers expect that they will incite a type Ia supernova explosion.

In the world of cosmology, it's not unusual for astronomers to go looking for one thing, only to happen upon something else entirely. This pair certainly follows in that tradition; they were found when researchers were trying to ascertain why certain stars that are nearing the end of their lifespan generate such asymmetrical nebulae. To do that, they examined one particular planetary nebula, called Henize 2-428.

"When we looked at this object's central star with ESO's Very Large Telescope, we found not just one but a pair of stars at the heart of this strangely lopsided glowing cloud," notes Henri Boffin from the European Southern Observatory (ESO), who co-authored the study.

This observation finally confirmed that, indeed, as some astronomers previously suggested, binary systems do create the oddly-structured nebulae like Henize 2-428. That wasn't the only thing we ultimately learned.

"Further observations made with telescopes in the Canary Islands allowed us to determine the orbit of the two stars and deduce both the masses of the two stars and their separation. This was when the biggest surprise was revealed,"  remarks Romano Corradi, a researcher from the Instituto de Astrofísica de Canarias, who contributed to the study.

The researchers then learned that the system is so compact, the stars — which individually weigh a little less than the Sun — complete one full orbit in just 4 hours. General relativity says that as the system further evolves, their orbits will continue to degrade until they reach the point of no return: in one fell swoop, they will collide, releasing a flurry of gravitational waves (another prediction of general relativity) as a result.

Finally, once one star transfers its mass to the other, the newer, more massive body will be so heavy, it will collapse in on itself, triggering the supernova explosion.

The team estimate that the detonation won't happen for another 700 million years, but the pair still marks an 'eureka' moment in astronomy.

"Until now, the formation of supernovae Type Ia by the merging of two white dwarfs was purely theoretical," explains David Jones, coauthor of the article and ESO Fellow at the time the data were obtained. Therefore, "The pair of stars in Henize 2-428 is the real thing!"

"It's an extremely enigmatic system," concludes Santander-García. "It will have important repercussions for the study of supernovae Type Ia, which are widely used to measure astronomical distances and were key to the discovery that the expansion of the Universe is accelerating due to dark energy".

The paper, entitled “The double-degenerate, super-Chandrasekhar nucleus of the planetary nebula Henize 2-428," was published in Nature earlier this week.