"Roughly the size of Manhattan." 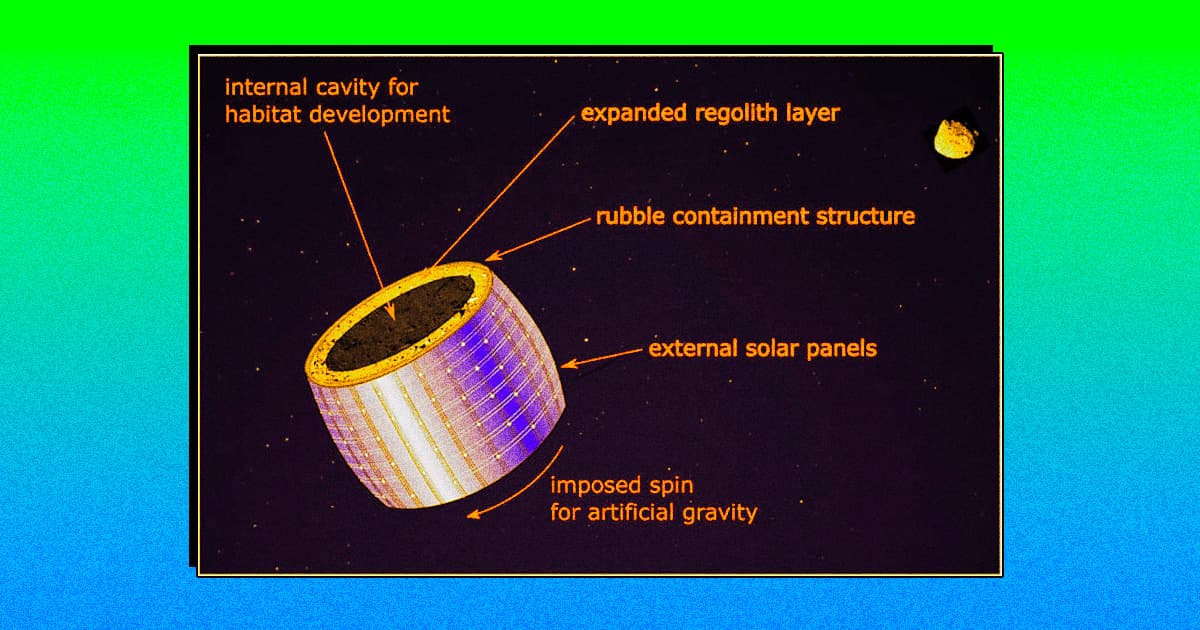 Image by Illustration via University of Rochester / Futurism

Researchers admit that it's "wildly theoretical" to propose putting a giant mesh bag around an asteroid to build space cities — but it's technically feasible, they argue.

Taking their cues from the golden era of science fiction and NASA's ambitious 1970s project planning, a team of engineers and astrophysicists at the University of Rochester maintain that their concept, while ambitious, is only outlandish by today's standards.

The concept of floating space cities is far from new. In 1972, physicist Gerard O'Neill made history when NASA commissioned him to design a space habitat. At the time, he came up with the ingenious concept that came to be known as "O'Neill cylinders," which were spinning cities that feature two rotating cylinders going in opposite directions to simulate Earth-like gravity.

"The cylinders would rotate fast enough to provide artificial gravity on their inner surface," reads a press release, "but slow enough that people living in them would not experience motion sickness."

Referenced by the likes of space cadets like Elon Musk and Jeff Bezos, O'Neill cylinders have been a sci-fi staple for 50 years now — but the concept proposed by this team of mechanical engineers, physicists, and astronomers might provide a glimpse of what these kinds of future space cities could actually one day look like.

Because it would be prohibitively expensive to get all the materials for a classic O'Neill cylinder out into space, the researchers came up with an alternate approach: using "all those flying mountains whirling around the Sun" — asteroids — which could "provide a faster, cheaper, and more effective path to space cities," as University of Rochester physics professor Adam Frank, who co-authored a recent paper published in the journal Frontiers, said in the press release.

They call their project "Habitat Bennu," which borrows its name from a possibly-hollow asteroid that was first discovered back in 1999 and recently visited by Japan's OSIRIS-REx spacecraft.

The major drawback of using an asteroid for this purpose is that they're often more of a collection of rubble than our Earth's solid surface.

But that's where the mesh bag comes in.

By covering an asteroid in a giant bag made from carbon nanofiber tubes just a few atoms in thickness, such a bag could potentially "envelope and support the entire spinning mass of the asteroid’s rubble and the habitat within, while also supporting its own weight as it spins," the press release notes.

A mechanism could then spin the asteroid around inside the bag, causing bits of rubble to hit the nanofiber mesh bag, which would then "snap taut" and produce a layer that would shield the asteroid city's residents from radiation.

Meanwhile, the spin of the cylinder itself provides the inner surface with artificial gravity.

"Based on our calculations, a 300-meter-diameter asteroid just a few football fields across could be expanded into a cylindrical space habitat with about 22 square miles of living area," Frank said in the press release. "That’s roughly the size of Manhattan."

While this "wildly theoretical" concept is, well, the stuff of science fiction for now, it doesn't have to remain that way forever, the researchers argue.

"The idea of asteroid cities might seem too distant until you realize that in 1900 no one had ever flown in an airplane," Frank continued, "yet right this minute thousands of people are sitting comfortably in chairs as they hurdle at hundreds of miles an hour, miles above the ground."

"Space cities might seem like a fantasy now," he added, "but history shows that a century or so of technological progress can make impossible things possible."

More on asteroids: In NASA Simulation, Humankind Dismally Failed to Save Earth From Killer Asteroid

Read This Next
Don't Look Up
SpaceX Satellites Disrupting Ability to Spot Killer Asteroids, Scientists Say
Rock Is Dead
NASA Spacecraft Grabbed Too Many Asteroid Chunks and Now They're Drifting Into Space
Blind Spot
SpaceX’s Satellite Constellation Could Hide Killer Asteroids
Metal Volcanoes
Explosive Research: Some Asteroids May Have Had Volcanoes
Particle Plume
NASA Shocked by "Plumes Erupting From an Asteroid’s Surface"
More on Off World
Killernova
6:10 PM on the byte
Scientists Find "One in Ten Billion" Star System Primed to Explode in Titanic Kilonova
Lonely Planet
Yesterday on futurism
Scientists Find Nearby Planet the Same Size of Earth, Plan to Search It for Life
Take Cover
Feb 4 on the byte
Space Startup Blows Up Another Giant Inflatable Space Station Module
READ MORE STORIES ABOUT / Off World
Keep up.
Subscribe to our daily newsletter to keep in touch with the subjects shaping our future.
+Social+Newsletter
TopicsAbout UsContact Us
Copyright ©, Camden Media Inc All Rights Reserved. See our User Agreement, Privacy Policy and Data Use Policy. The material on this site may not be reproduced, distributed, transmitted, cached or otherwise used, except with prior written permission of Futurism. Articles may contain affiliate links which enable us to share in the revenue of any purchases made.
Fonts by Typekit and Monotype.