Are Earth's Radio Signals Being Intercepted by Aliens? 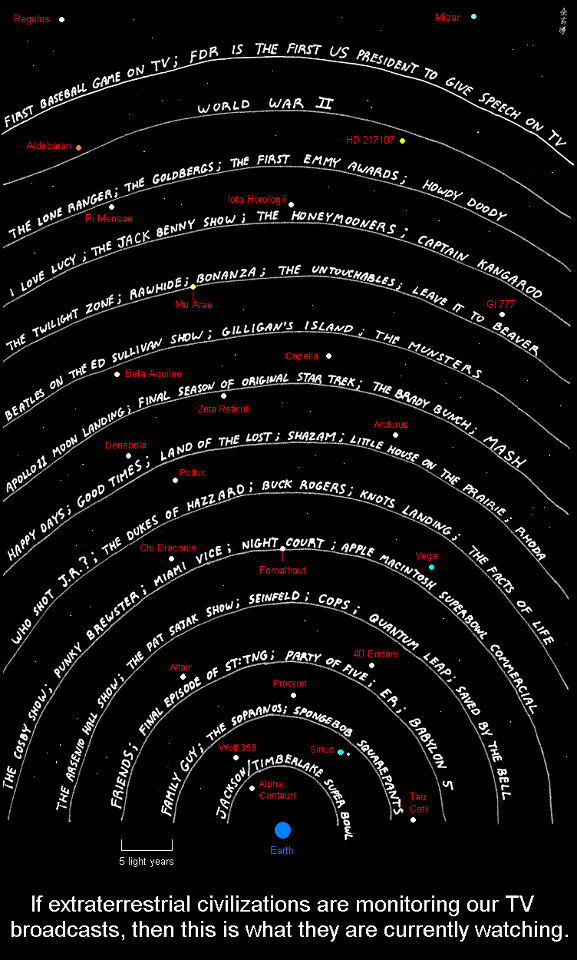 The SETI (Search for Extraterrestrial Intelligence) Institute has been searching for intelligent life in our universe for the last 29 years. People have been searching for signals for longer than that – I presume since the dawn of radio astronomy. Of course, they haven’t turned up any signs. But let’s dive into a hypothetical real quick. Suppose tomorrow, we detected the first radio broadcasts of an alien civilization that lives on a star 1,000 light-years from Earth – on the other side of the Milky Way.

We listen to their initial broadcasts, and eventually start seeing their earliest television broadcasts. The greatest minds on Earth eventually decipher the alien’s language. and we are able to understand what we see and hear. We watch their politics, culture, science, and religions evolve over time. We potentially learn some lessons along the way as the aliens crack problems we struggle with. We listen to our new friends for a thousand years. Maybe, something happens that destroys the civilization – through their own cataclysmic wars, a naturally occurring apocalyptic event they just didn’t see coming, or their mishandling of the environment. Maybe they switch to a different way of broadcasting that we simply can’t hear. Maybe, they vanish--radio silence--and we don’t know why. Maybe, an alien race 1,000 light-years away eavesdrops on our own radio and television broadcasts and experiences the same thing as our own civilizations rise and fall over time. Could such a scenario occur?

As you undoubtedly know, Earth is surrounded by a sphere of electromagnetic radiation that has been generated by humans since we started broadcasting electromagnetic waves wirelessly. This concept has been exploited across our entertainment scene, such as the movie “Contact” where ET sends us back the first television broadcast humans made powerful enough to punch into interstellar space – Hitler opening the 1936 Berlin Olympic Games. In reality, such an event will probably not happen, and it’s all thanks to the inverse square law.

The inverse square law is a law in physics that states that a “specified physical quantity or intensity is inversely proportional to the square of the distance from the distance of that physical quantity.” In short, if you double the distance, you quarter the power of force. To understand this, I’ll use Voyager 1 as an example.

Currently, Voyager 1 is the furthest man-made object from Earth. It’s about 123.6 AU away (well beyond the orbit of Pluto), and it is preparing to enter interstellar space sometime (hopefully) before it ultimately loses power. Because of the inverse square law, when voyager communicates with us, the signal we receive is about a 20-billionth the power of a watch battery. We are able to receive and understand Voyager’s communiqués mostly because we know exactly where to look, when to look, and the signals are aimed directly at us in a very precise fashion. Unfortunately, when we send Star Trek: The Original Series out into the cosmos, our intention wasn’t to regale aliens with our TV programs.

As far as these signal go – either from the perspective of humans hearing ET or ET hearing us – the most we can hope for is that the signal itself stands out from the cosmic background noise. Even then, the intelligent species doing the searching (either the aliens or us) will have to gather a ton of data on any given system in order to discern with reasonable certainty whether or not an anomaly that would potentially be an intelligent signal exists. Using that information, we could conduct more extensive searches to confirm the signal as sufficiently peculiar, but we won’t be watching ET’s late night television.

If that wasn’t sufficiently dampening enough, it gets worse. From the human side of things, we have progressively transitioned to digital entertainment (instead of broadcasting powerful analogue signals out into the cosmos). The digital counterpart is far less powerful (about four times so) and will be much harder to detect. As Cecil Adams says so eloquently, “the age of pumping high-power terrestrial noise into the ether is likely to be a mere blip lasting less than a century.” Whereas our galactic radio presence won’t vanish completely, Earth will certainly become considerably less noisy.

Then again, maybe ET never used radio in the same way we did. Maybe they kept all of their communications cable-based. It could also be possible that this progression of technology is natural, and there is only a centuryish window to detect noticeable signals from an intelligence. Considering there are hundreds of billions of stars in the Milky Way, and we’ve only surveyed 750 or so of them for ET, such a situation would prove problematic for detecting ET in such a very short window.

At least, we can walk away from this thankful that the first human ET sees won’t be Hitler... Jersey Shore will likewise be lost for all time, and they will never suffer through songs from Justin Beiber.