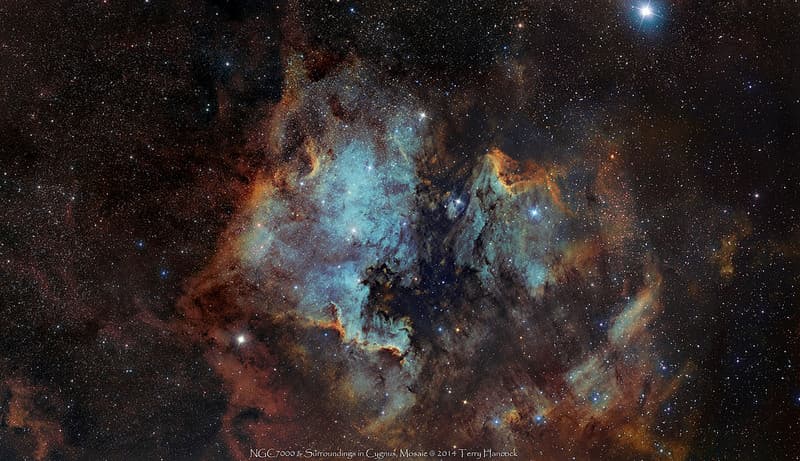 To some, this celestial region resembles the continent of north America. To others, it merely looks like a star forming region—and a beautiful one at that. Formally called NGC 7000 (or Caldwell 20), the North America Nebula can be found approximately 1,600 light-years from Earth in the Cygnus constellation.

As colorful as it may be, its size might be its most incredible attribute, being that the entire complex stretches over 40 light-years in width and 50 in height—meaning it occupies the same amount of sky as three full moons would (of course, it's much too faint to be seen with the naked eye). Also impressive is the fact that astronomers believe one single star, perhaps one hidden within the complex's geometric center, is responsible for the vast majority of the ionization (the mechanism through which nebulae glow). Originally, Deneb was held responsible, but a more thorough search concluded that a 6th magnitude star—called HD 199579—must be to blame (if Deneb was the culprit, the nebula itself would need to be resized dramatically, doubled, according to some sources).

Regardless, there are several other objects of interest within, and next to, the star forming cloud, like NGC 6977: an open cluster of stars situated in the "east coast" of North America. It simply wouldn't be right not to mention its famous, but more difficult to see, neighbor—the Pelican Nebula. Both regions are separated by a dense cloud of interstellar dust.

This image, taken by Terry Hancock (from Down Under Observatory), is said to be the widest view yet of NGC 7000.