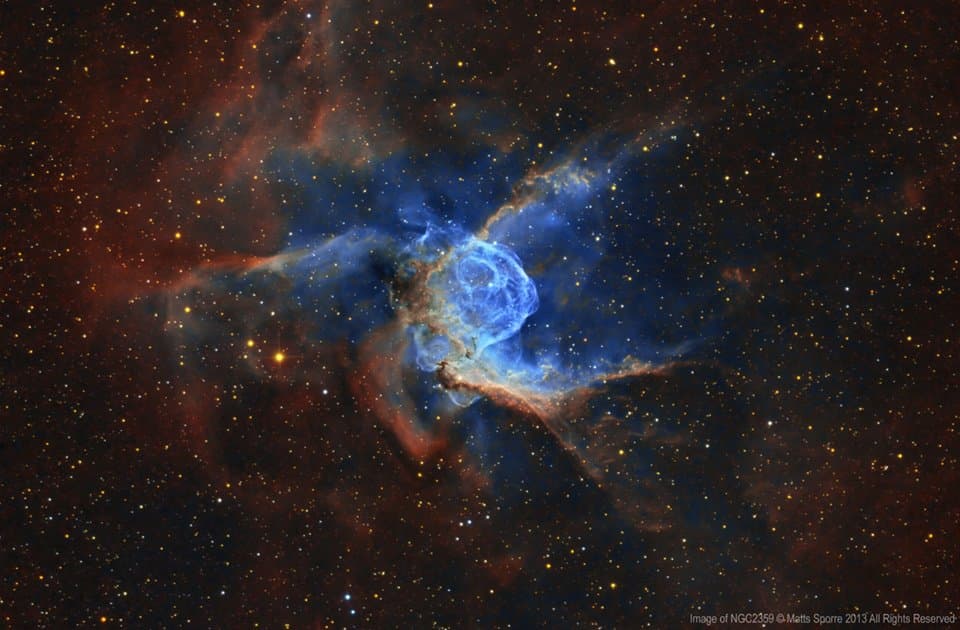 Thor's Head Nebula (otherwise known as NGC 2359) is located in the constellation of Canis Major, some 15,000 light-years from Earth. There are all sorts of nebulae types, but this particular one is an emission nebula, which essentially means that the region is a large cloud of ionized gas that emits light at all sorts of wavelengths, each corresponding to a certain element.

This nebula's features are a product of a single, but unstable Wolf-Rayet Star (HD 56925) that is losing mass at an exceptional rate through pulsations and stellar winds. These stars are typically VERY massive, often exceeding 20 solar masses, with temperatures ranging from 25,000 K to 50,000 K, depending on the radiation pressure felt in the star's vivacious outer layers. Said layers are so strong, they can funnel the gas out into space at speeds equal to 300-2400 km/s.

As it was mentioned earlier, the nebula is fed by a Wolf-Rayet star that has not gone supernova just yet. Instead of forming after the death of a massive star, the physical characteristics seen here are due in no small part to interactions between HD 56925 and a very large molecular cloud looming nearby. The gravitational exertion between both parties creates the structure that makes up Thor's"wings".

As an interesting side-note; this nebula covers a full 30 light-years of space. Meaning it takes light less time to travel all the way to and from our Sun and Proxima Centauri (its closest neighbor) TWICE, than it does for light to make one trip through this region.