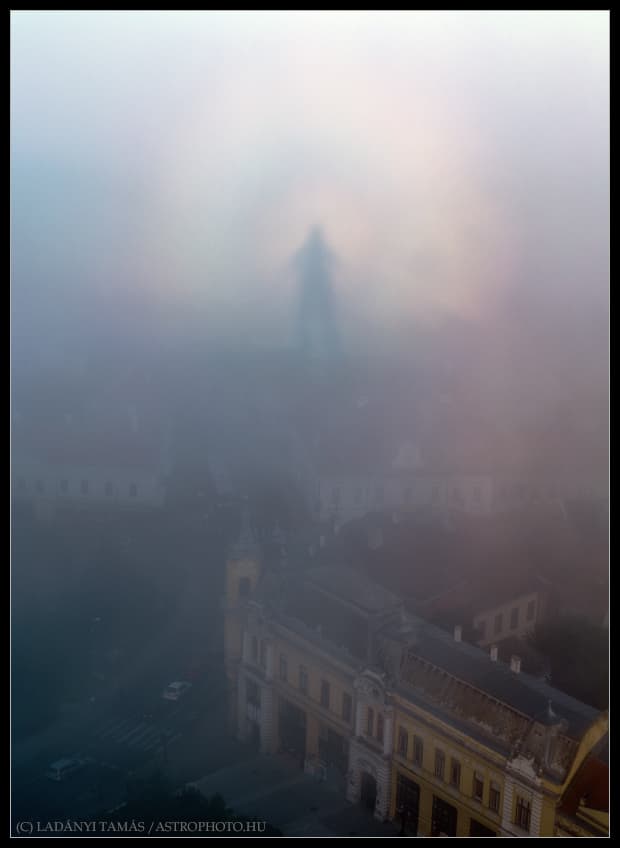 Do YOU believe in ghosts, as in, spirits of the dead that still roam the Earth? Those of you who do believe will be interested to know that earlier this month, a spiritly apparition appeared over the city of Veszprem, Hungary. There's a catch though. This ghostly figure can be explained using science.

The image pictured to the left was captured in the early hours of August 11th by photographer Tamas Ladanyi. Within the morning fog encompassing the building, the photographer captured a gloomy figure as the Sun remained hidden behind his back, from a 20-stories-high vantage point. His position in relation to the Sun and the building indicates that the figurine is the result of something that is called the Brocken Spectre (sometimes called the Glory).

This atmospheric phenomenon is pretty much an optical illusion. It happens when someone has the Sun to their back while standing at a high distance, looking back down at something through fog, smoke or a mist. Their shadow is essentially projected back into the fog or mist through the reflection of light when it encounters water droplets within the atmosphere. Once they make contact, the rays of light scatter back out in the Sun's direction, or in front of the observer.

This trippy effect can be seen in airplanes and while hiking in the mountains.