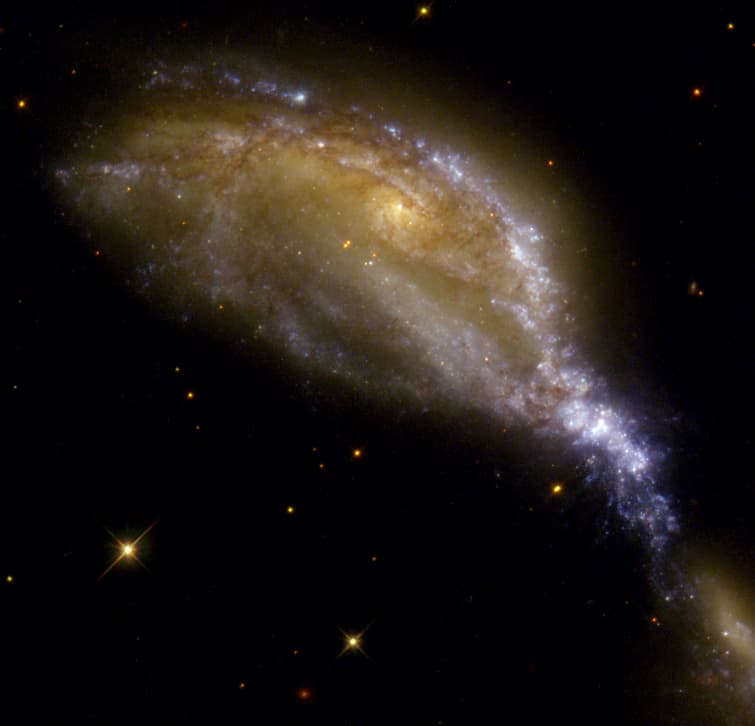 We have a vast collection of colliding galaxies cataloged, but this example — designated with the name NGC 6745 —  is surely one of the most unusual-looking ones. Within this frame, we see the main galaxy and what's left of its former counterpart, which can be found in the lower right, almost out of frame.  The larger of the two exhibits characteristics of a spiral galaxy, but after its encounter, it took the shape of a peculiar galaxy.

Like with all mergers, tidal interactions caused NGC 6745's shape to distort dramatically, transforming the newer, larger galaxy into something unrecognizable from its previous form. However, it was able to retain its galactic nucleus.

While these interactions wreak havoc in many ways, they also rejuvenate middle-aged galaxies running low on fuel by helping kick start a new era of star formation. Evidence of that can be seen here in the form of the large bluish-white knots hanging out near the edge of the galaxy's newly-formed tail. (These knots are useful in other ways, namely that they reveal the path in which the smaller galaxy traveled in) Stars like this burn hot and are incredibly bright. As such, the vast majority will only live for several millions of years before going out as supernovae. .

Both galaxies lie about 200 million light-years from Earth in the constellation of Lyra. The larger of the two spans an unimpressive 80,000 light-years across.