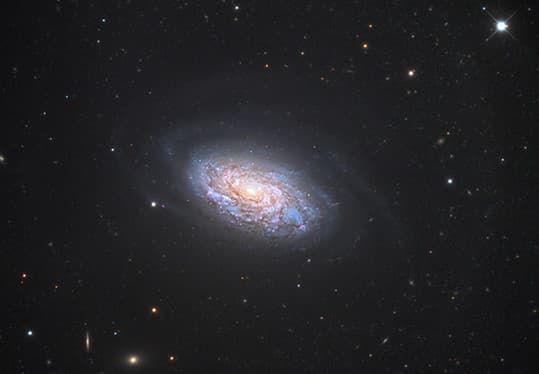 NGC 4414 is an understated spiral galaxy situated approximately 60 million light-years from Earth in the constellation of Coma Berenices. Astronomers have known about its existence since the 1990's (at the latest), but it is scarcely photographed. In fact, until recently, little was known about the core mechanism powering star formation within the galaxy's confines. That ended when a research team published a paper in arxiv back in 2014, positing that NGC 4414 is surrounded by an extensive shell, believed to be tied to an interaction with a dwarf galaxy.

This, in and of itself, isn't unusual. Many galaxies have halo-like shells (our own galaxy does). However, in the case of NGC 4414, its shell extends well beyond the boundary of Hubble's field of view, making it incredibly difficult to capture it in its entirety, Moreover, the shell is much too faint to be seen with optical imaging tools, ergo, no image caught a glimpse of it, until now.

In a new image from Adam Block (from the Mount Lemmon SkyCenter), the shell can be seen for the first time in color, thanks to a 27-hour exposure time.

Block discusses the significance of the galaxy, and the importance of these features:

Block has also provided an enhanced image that shows the true size of the structure, which you can see here. A larger version of the image up top can be found here.