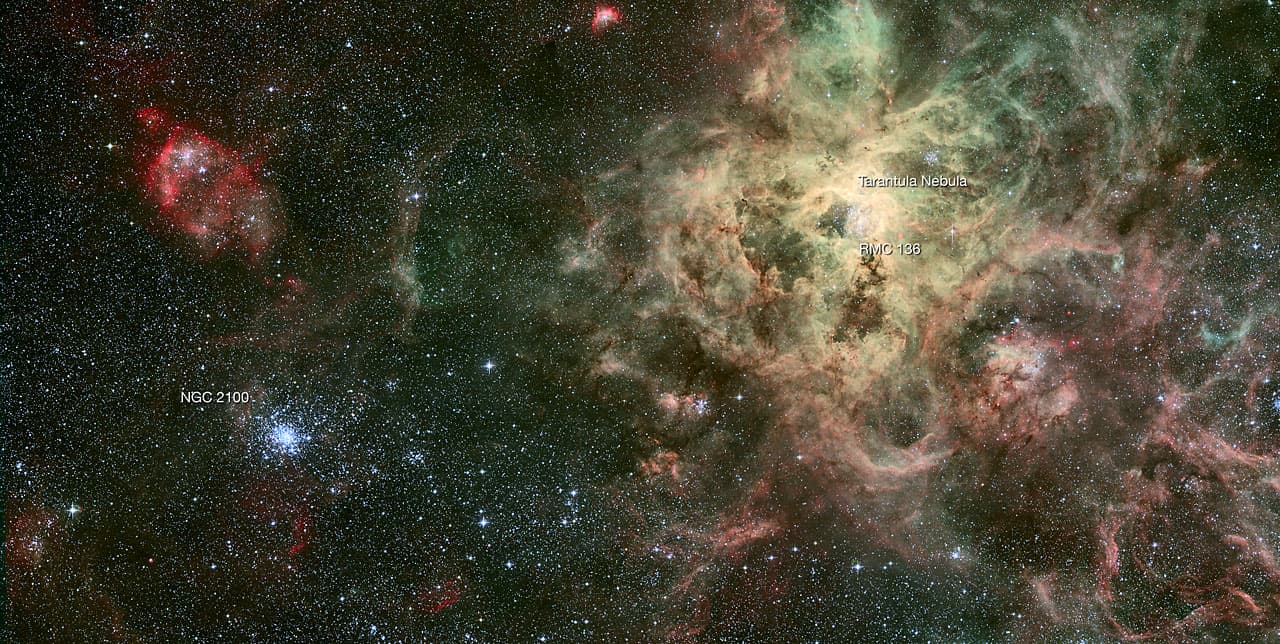 Meet NGC 2100: a star cluster with an accompanying nebula in one of the Milky Way's satellite galaxies, the Large Magellanic Cloud. Usually, when a telescope is focused on our galactic neighbor, it concentrates on one of two regions: either the Tarantula Nebula or N44. NGC 2100 is very unlucky in that regard, as it can be found within close proximity to the former region (otherwise known as 30 Doradus). In fact, the two are so close together, you can actually see the Tarantula Nebula peeking through in the lower left.

This image, captured using the ESO's New Technology Telescope, combines multiple exposures, each taken with a specialized color filter. By putting them all together, the image paints a clear picture of what's happening inside the nebular cloud. For instance, the stars themselves are shown in true color, while ionized hydrogen can be seen in red, and oxygen in blue.

These things, in turn, largely correspond to temperature. The stars in the cluster doing a majority of the work, called NGC 2100,  burn so brilliantly, they can set oxygen alight. The regions in which blue tapers off and becomes red are where the cone of influence ends—the stellar winds simply have no effect there. Instead, this section of the cloud is pervaded by more evolved stars, which can still excite the gas and generate emission nebulae.

NGC 2100 is classified as an open cluster of stars. Astronomers estimate they are around 15 million years old, which makes them pretty young on a cosmological scale. However, open clusters tend to breed large stars that live fast and die young, ergo some might say that this cluster is middle-aged.

The whole lot can be found about 163,000 light-years away from Earth in the constellation of Dorado.