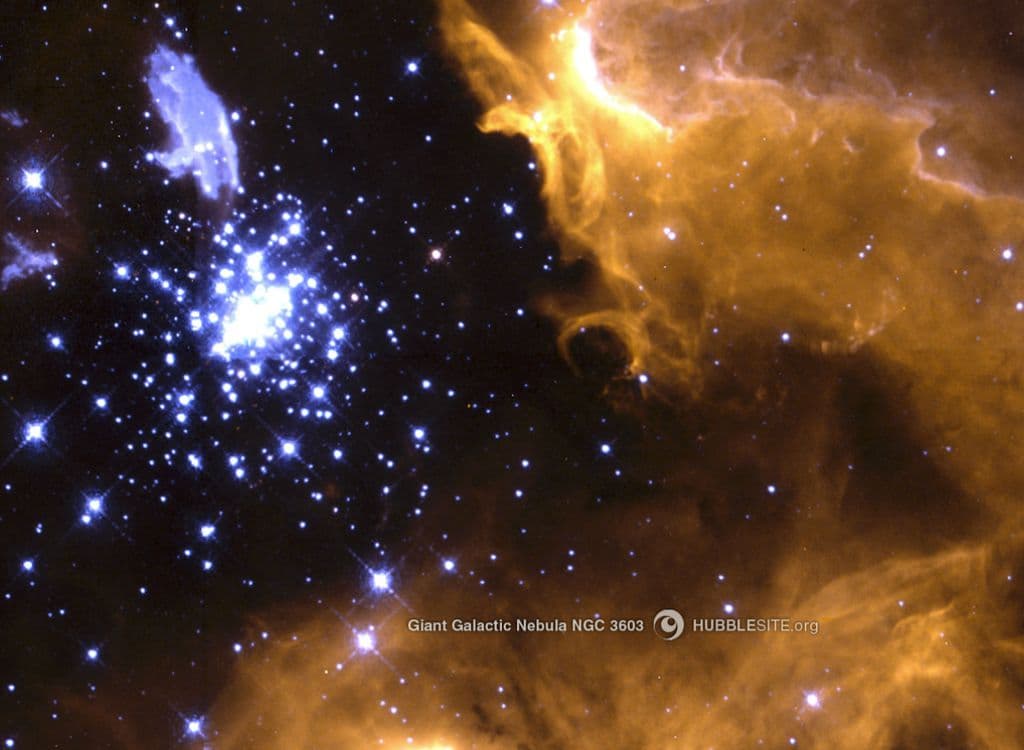 Conflicting scenes of life and death are simultaneously playing out within NGC 3603: a stellar nursery located approximately 20,000 light-years from Earth toward the Carina constellation.

Driven by the whims of a cluster of stars, NGC 3603 resembles a cosmic jewelry box—only the glistening jewels aren't jewels at all, but volatile high-mass stars, known as Wolf-Rayet stars (or HD 97950, collectively), hellbent on destruction.

Based on the nebula's wispy appearance, it would seem as if it is working. In the coming years, as the stars inch closer toward their untimely demise, more drastic changes will follow. In fact, if we were to look at the nebula in the present—as it is now, not as it was when the light we currently see started its 20,000-year journey—it would probably look different already. Astronomers estimate that the stars expel material at speeds exceeding 1.9 million miles (3 million km) per hour, which is rather impressive.

They would be impressively bright as well, if they weren't obscured by so much dust. As the radiation seeps through, the gas and dust let up a bit, and more light breaks through. Eventually, all that will remain will be the stars. None as big or bright as Sher 25: the blue supergiant in the upper-left. According to NASA,

"Like the famous 1987A supernova, a unique ring of glowing gas encircles it. The grayish-blue color of the ring and the blobs to the upper right and lower left of the star indicate the presence of chemically enriched material. Near the center, young, hot massive stars dominate the starburst cluster. Meanwhile, the dark clouds at the upper right, which are called Bok globules, probably are in the early stages of star formation. To the lower left of the cluster are two compact, tadpole-shaped emission clouds, which scientists believe may be evidence of protoplanetary disks, which eventually condense to form planets."