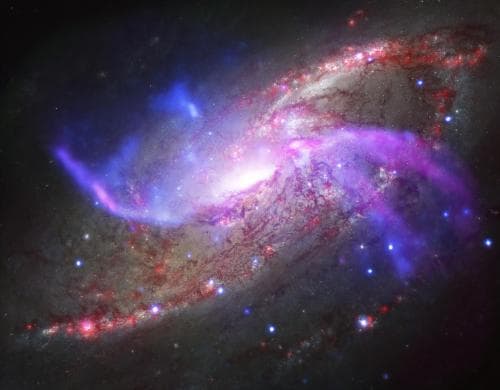 Today, Americans will celebrate their independence from England. There will be BBQ, an endless amount of booze and, of course, hundreds of millions of dollars worth of dazzling fireworks will light up the skies. The great thing about the universe is that it doesn't care about the fourth of July, as all of the fireworks used tonight combined would have nothing on this galaxy's grand fireworks finale.

In this image, we see vibrant jets of glowing material emanating from a black hole lurking within the central portion of Messier 106. While spectacular at optical wavelengths, these jets can not be seen unless we probe the region at multiple wavelengths.

Here, we see the key details of the jets courtesy of not one, but three different telescopes: the Spitzer Space Telescope, Chandra X-ray Observatory and the Herschel Space Observatory

All of the data reveals that the black hole's jets are heating plasma up in such a way that they mimic an epic firework display. What's more impressive is just how far the jets are being spat out. Some extend about 2/3rds of the way from the galaxy's center.

Messier 106 —also known as M106 or NGC 4258 — can be found approximately 23.5 million light-years from Earth in the constellation of  Canes Venatici.