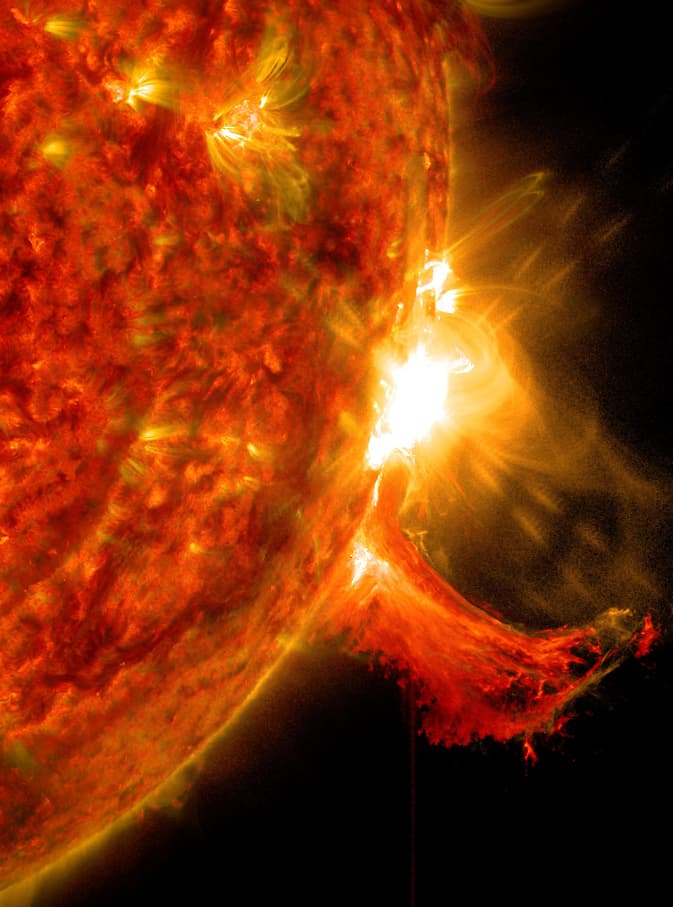 Last week, on October 2nd, NASA's "Solar Dynamics Observatory" watched as the Sun unleashed a moderately powerful solar flare (also worth noting is the stream of gas extending below the ejected material in a seemingly straight line). As stunning as it was from this up-close and personal vantage point, this flare was merely an M-class solar flare (M7.3, to be specific).

Flares within this classification have just 1/10th of the power X-class solar flares are known to generate (The most recent of which came from sunspot AR2158. Not only did these "twin" X-class solar flares spawn powerful geomagnetic storms last month, but they also crippled high-frequency radio communications for over an hour). They can, however, sometimes cause radio blackouts of their own (on a smaller scale). As Space Weather Live notes, "They cause small (R1) to moderate (R2) radio blackouts on the daylight side of the Earth. Some M-class solar flares can also cause radiation storms. Only the stronger M-class flares, which are long in duration and accompanied by an Earth-directed Coronal Mass Ejection (CME), could cause a geomagnetic storm strong enough for aurora on the middle latitudes."

So, as a manner of speaking, this flare was more bark than bite, but that certainly doesn't make the vulnerabilities in the Sun's magnetic field (the source of solar storms) any less mesmerizing to witness (especially in video form).

[toggle title="Additional Information About the Video:"]

“No Comment Before Sunset” by Lars Leonhard (courtesy of the artist and BineMusic).

This video is public domain and can be downloaded here.