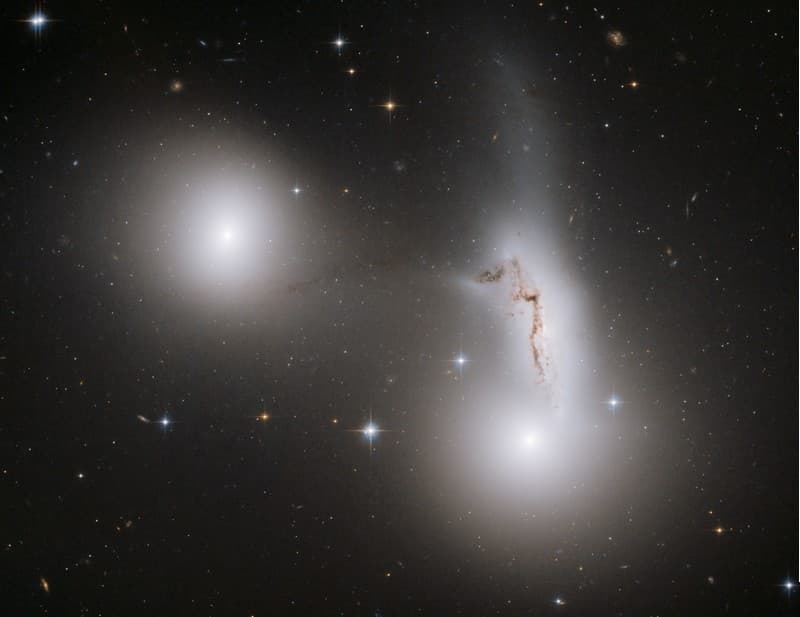 In this image, we come across a discombobulated galaxy group — called the Hickson Compact Group 90 (or HGC 90), after the Canadian astronomer who discovered it — found about 100 million light-years from Earth in the little-known constellation of Piscis Austrinus.

HGC 90 is just one of around 100 compact galaxy groups Paul Hickson and his colleagues identified, but it's arguably the most memorable of the bunch. This Hubble-taken image features the group in unprecedented detail, showing all three galaxies — NGC 7173 (the one in the middle left), NGC 7174 (middle right), and NGC 7176 (lower right) — involved in a cosmic game of cat and mouse.One of them is believed to be spiral galaxy with an extraordinarily large concentration of dust, sandwiched between two much larger elliptical galaxies (generally speaking, they contain very little usable gas and dust).

The effect they've had on the spiral galaxy is very clear. The combined gravitational force of both galaxies has stretched and distorted the dusty spiral beyond recognition, whilst also rejuvenating star formation activity for a small window of time. Eventually, the three galaxies will formulate either one or two super galaxies, but I, for one, prefer them as they are now.