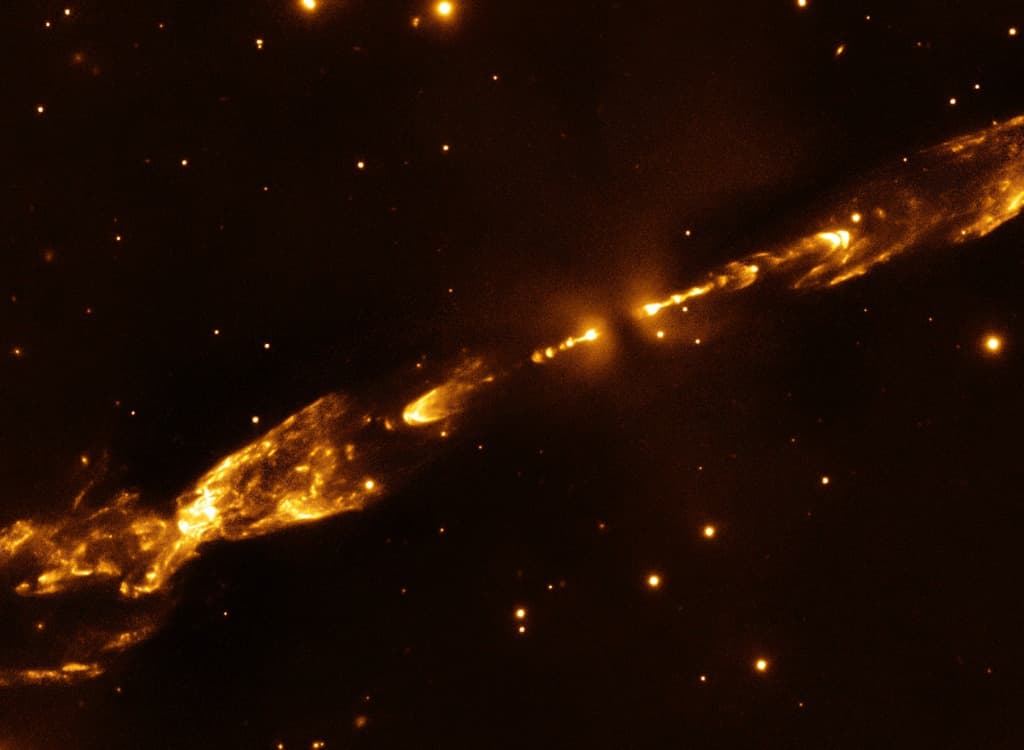 In a new image from the European Southern Observatory (ESO), a pair of jets emanating from a young star—known as Herbig-Haro 212 (HH 212 for short)—come to life in a brilliant display of gold.

Taken by the ESO's Infrared Spectrometer and Array Camera (ISAAC) when it was still in use, this extraordinary image charts a short-lived evolutionary phase in which a nebular cloud collapses under its own weight, bringing a baby star to life. Before the star emerges, the protostar—still embedded in its parent molecular cloud—begins to spin, and its temperature increases alongside it. Eventually, it starts fusing hydrogen and helium, with leftover material building the foundation of an accretion disk.

The disk, which usually births planets, moons, asteroids, and planetesimals, is believed to play an integral role in the formation of the jets—although the extent of its role remains a little unclear. The reason for this largely comes down to the fact that this phase only lasts for a short time, and the jets aren't always visible from Earth. With HH 212, we are viewing the star—estimated to be just a few thousand years old—and its disk edge-on.

Additionally, this vantage point allows us to see just how symmetrical the jets are. The other features are the result of knots, which, according to the ESO, are spat out at "relatively stable intervals." They continue by noting:

"This stability suggests that the jet pulses vary quite regularly, and over a short timescale—maybe even as short as 30 years! Further out from the center, large bow shocks spread out into interstellar space, caused by ejected gas colliding with dust and gas at speeds of several hundred kilometers per second."

HH 212 can be found approximately 1,400 light-years from Earth toward the constellation of Orion. If you zoom out a bit, you will find that it has an extremely famous neighbor—the Horsehead Nebula. (See a larger image here)