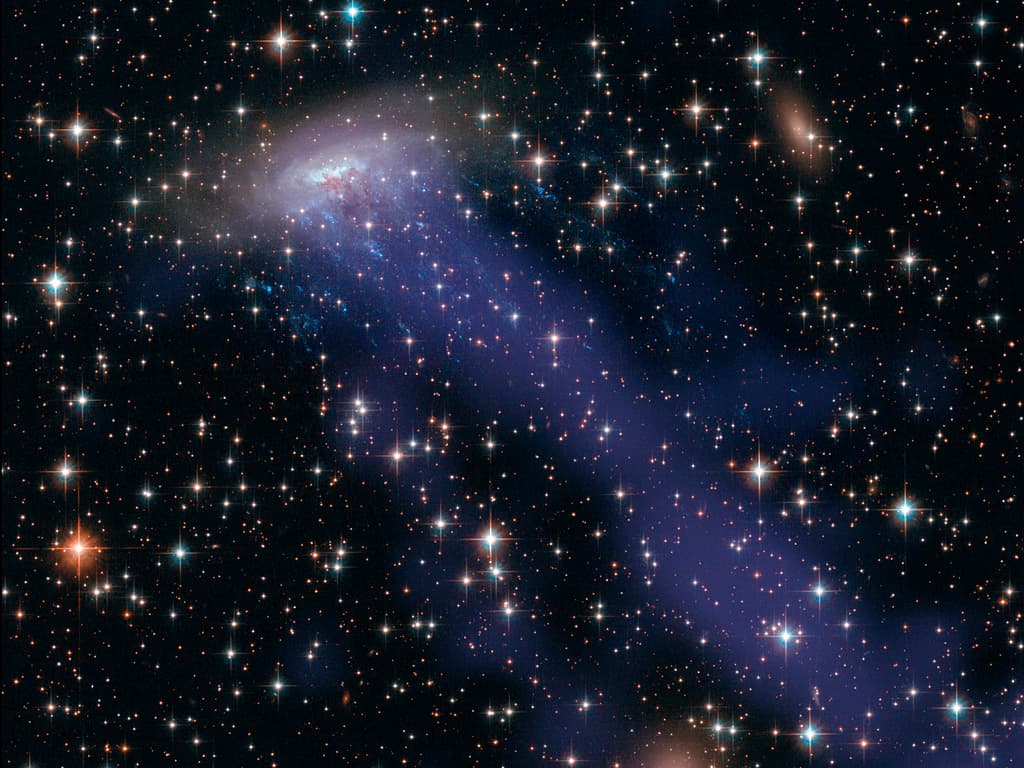 Resembling a glitter-strewn canvas, the colorful site of this cosmic hit and run is about 220 million light-years distant. When this image was taken earlier this year, the focal galaxy — dubbed ESO 137-001 — was hurling through space at nearly 7 million kilometer per hour, traveling through the behemoth galaxy cluster known as Abell 3627 (or the Norma Cluster).

As you might image, the trip is taking its toll on ESO 137-001. As it continues moving through the cluster, ram pressure — where, as researchers note, "streaks of bright gas are being dragged out into space by the cluster it is moving through" — is stripping the galaxy of its appreciable gas and dust content. Eventually, this vibrant spiral galaxy will morph into a shell of its current self.

When that time comes, hundreds of millions.. perhaps even billions.. of years from now, the galaxy will all but halt the production of new stars. It might even come to resemble one of its neighbors, pictured up and to the right of ESO 137-001. This small, yellow-tinged elliptical galaxy is much more distant, they merely just share the same constellation (all are situated in the constellation of Triangulum Australe), and our field of view.

Indeed, its best days have already come and gone, but, if anything, this fact gives us even more of a reason to appreciate it in its current form. This Hubble-Chandra composite accentuates many of its most noteworthy features, from the dusty "claws" that obscure some of its central core, to the huge tails (some span nearly 400,000 light-years across, making them about 4 times larger than our entire galaxy) of diffused gas. Interestingly, most of the star formation activity is taking place within them (seen in blue patches).