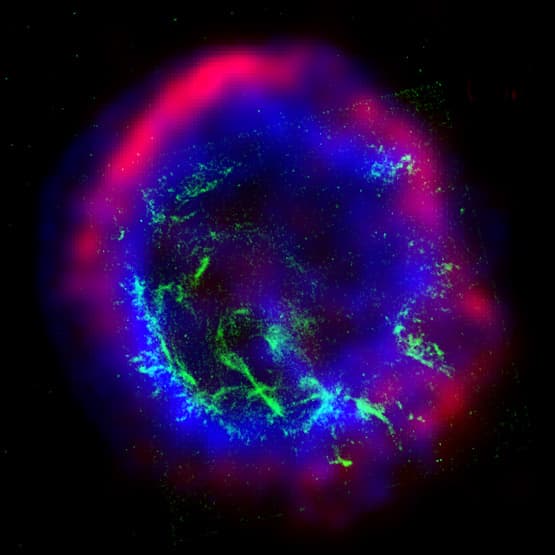 This ghostly apparition can be found approximately 190,000 light-years from Earth in the Small Magellanic Cloud (SMC), both, in turn, lurk within the confines of the Tucana constellation.

Called E0102-72, we are glimpsing into the heart of a fiery supernova: a massive star that imploded roughly 191,000 years ago. Because of the large distance separating Earth from the Small Magellanic Cloud, we are seeing the region as it appeared 190,000 years ago—when the explosion was 1,000 years old. If we were able to transcend space and time, it would surely look much different now, in "real time."

Based on its current state, astronomers assert that the progenitor star was ejected at speeds exceeding 12 million miles (20 million km) per hour, where it met the remainder of its gaseous envelope—ultimately creating two massive shockwaves: one moving outward, another plowing back through the gas from which it came.

Data from the Chandra X-Ray Observatory can be seen in blue. It illustrates the fact that the hydrogen gas is extremely hot, reaching temperatures in excess of one million degrees C. Optical light, collected by the Hubble Space Telescope, maps the cooler clumps of oxygen—an element found in abundance within this portion of the interstellar medium—that are still present. Finally, radio data comes from the Australia Telescope Compact Array; it traces the path high-energy electrons take through magnetic field lines, and around one of the shockwaves.

When combined, this information can be used to show how heavy elements are dispersed following supernova explosions. (See a larger image here)